It was back in February when I was visiting Chad and Nicole that Addie sailed up into my lap when my notebook was in my lap and . . it’s never been the same since. When I got home, I said “Vince, can you please fix my laptop?” Vince can fix anything . . except the lawnmower!  He messed with it, tightened some screws and the verdict was .. no, you need a new computer. I squawked . . I didn’t want a new computer. I just wanted the old one fixed! I had everything just the way I wanted it on the old computer (which was less than 2 years old . . I know because Vince found the receipt and made sure to give me his speech about how long his computers last and how mine never make it more than 2 years!). The way I see it, he sits in his chair with his laptop, and he doesn’t get up much. I sit in the chair with my computer and I have to get up to check dinner, take dogs out, put clothes in the dryer . . any traveling I do, my laptop goes with me. Any traveling he does, his work laptop goes with him.  Worst of all, he doesn’t always have a Dr. Pepper sitting by his computer. Dr. Peppers and computers do not mix!

So, he insisted I get a new computer. I resisted so . . worst case scenario . . he showed up at home one day with my new computer. “You’re going to love it . . it’s Windows 8. That’s all you can find now. Everyone who has it hates it!” I said “Fine . . I’ll just keep using my old one!” and that’s what I did til yesterday when it finally said “no more. I quit!” This morning I got the new one out, fired it up, coaxed the old one into booting up so I could get things transferred from it to the new one. Had to use the iPad a couple of times to find out things while both computers were communicating with each other. 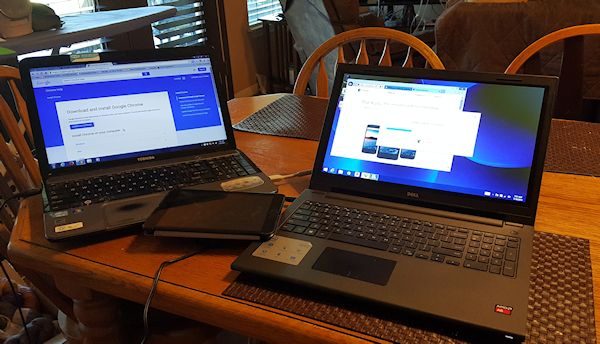 Windows 10 will be out in a couple of weeks and I’ve signed up for the free upgrade but honestly . . I don’t hate Windows 8. I kinda like it. If Windows 10 is an improvement, I’m going to be real happy. I love that this computer is a touch screen. Not sure if that’s part of Windows 8 or if it’s just a touch screen model computer.

There was a time when I would have switched to a Mac but I doubt I will for two reasons. First is the cost and the fact that I can’t seem to take care of a computer, yet other things I have last forever.  I look at my laptops as kind of “throw away” . . use them til they get bad and then get another one and when we pay in the $200 range and they last me a couple of years, I’m not complaining. The second reason I probably won’t switch to Mac is that I have had such a love/hate relationship with my iPads. I liked them ok til I got the Samsung android tablet and now, I rarely touch the iPads. Also, I struggled with giving up the iPhone for the android phone and oh, my . . I am so in love with that phone for so many reasons. I have the old iPhone in a drawer and every time I open that drawer and see it, I say to myself “I’m so glad I switched!” I know . . there’s a loyal following of Apple products out there but I am just not one of them.

Also, I probably don’t do on my computer what a lot of folks do. Basically it’s email and blog for me. Any old dinosaur computer would work for me .. til a sweet little granddaughter landed in the middle of it and she can do that any time she wants!  🙂