The last thing I do every night before bed is I take the black light flashlight out and go around the house looking for scorpions. It was a little after midnight last night when I was out and I thought I heard a baby crying . . so I stopped and listened . . and it was a cat meowing. I went back in the house and got the big flashlight and there was a light colored cat under the chicken coop that’s in the orchard. I don’t want to put water and food out there because there are baby chickens that might be tasty to a hungry cat, and I doubt the black cat will let another cat share his food and water so . . this morning I went out to scout around and see where I might could put food and water for the second cat. 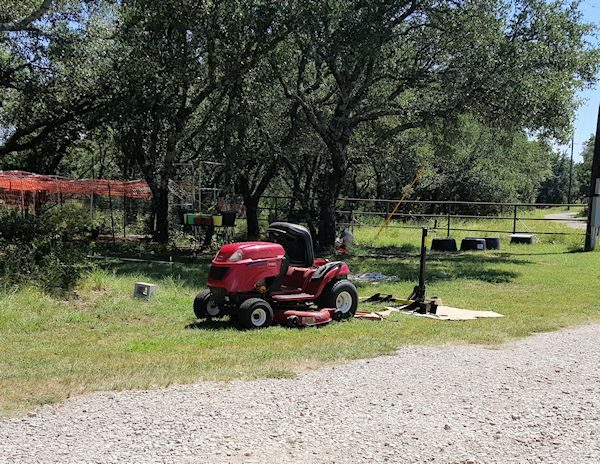 Vince is still working on the old mower and it’s still sitting along the side of the driveway.  He’s having a heck of a time getting the tension right on one of the belts but he’s about to get it . . maybe tonight.

I walked out the door, down the steps, and I thought . . there’s the kitty! I said “Here kitty, kitty!” The “kitty” turned around and looked at me . . like he was thinking . . kitty? Are you crazy? It’s a fox! It was a kitty meowing last night but it was not a kitty in the driveway this morning.

I don’t think it’s a good sign for a fox to be out and about in the daylight .. especially so close to the house. Maybe he was just looking for a chicken dinner but still . . I don’t like having him hanging around so close. If we see him again during the daytime, we’ll set a trap. In the meantime, I’m kinda nervous being outside when I’m here by myself. I know there are all kinds of critters in the woods but I don’t like it when they’re just steps from my house.