Back in September, 2014, I had written this post about the new compost bins and red wigglers. I ended up getting two of these composting setups and you can read more about them in the linked blog post. 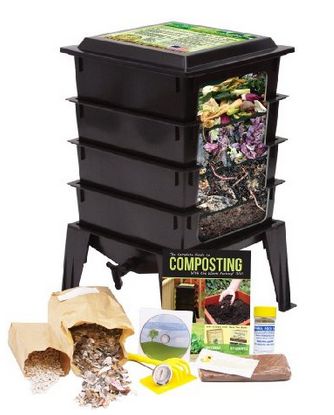 The way it works is this:  Starter material is places in the bottom tray (I didn’t even put the other trays on in the beginning), place red wigglers in there, and feed them fruit and veggie scraps. I generally feed about 2/3 food and 1/3 “brown” which is leaves, shredded newspaper, etc.

Once the bottom tray is getting full, place another tray on top, add more starter materials and begin feeding in that second tray and all the worms will move into that tray.

I had my doubts but while we were doing some planting this weekend, I removed a tray of compost for the second time. I have two setups so in nine months, I’ve had 4 trays of compost. I think the first two trays took a lot longer than the second trays but my worms are larger now and have produced babies so there are lots of hungry mouths to feed in there!  🙂 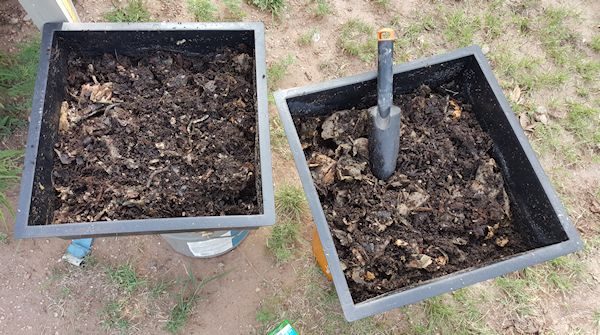 I had already used quite a bit of this before I thought to take pictures but the bins were both about 1″ from the top before I began using the compost. When I add newspaper, I shred it but I also keep layers of newspaper over the top of the worms/food/starter material and I keep that moist. They end up eating some of that but not all of it so there are some larger pieces of newspaper but used that right along with the compost.

I was really surprised that the worms moved up to the second level on their own each time. I had feared that I would be picking out worms but I didn’t have to move a single worm. Also, someone else who had this setup had said it took 9 months to get a tray full of compost. I’m thinking it took about 6 months to get my first tray but I believe now, if the worms stay healthy, I’ll be getting at least one tray per setup per month now.

I’m pretty impressed with this setup and my red wigglers. I had tried having red wigglers in several other setups before but this is by far the best one I’ve used.