Rita is truly on my last nerve. A couple of nights ago, I told Vince . . I just don’t know if we can keep her! I guess the I should have said “Why on earth would we keep her?” I’m way more patient with animals than I am with humans but she really has pushed her limits. No matter how much I love an animal, my home is my home and I’m not going to have a dog peeing on the floor when she had every opportunity to go outside. I’m not putting down puppy pads and I’m not dealing with doggy diapers. I’m just not! 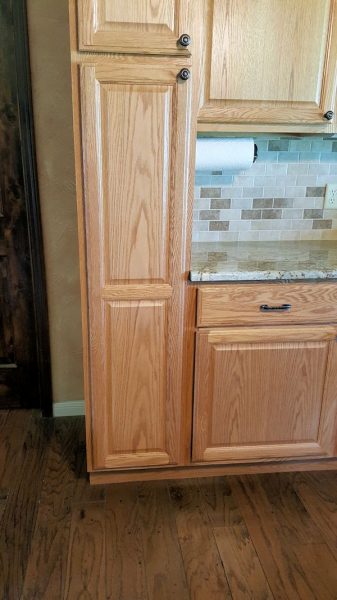 The final straw was this pantry door. My main pantry has a regular door with a door knob that latches and I can close it securely. It’s only when it isn’t closed tightly that she can get in there but this is part of the new cabinets and it just pushes shut . . no latch. Yes, I could get a kid safety latch but I would probably have to get them on all our bottom cabinets now that she’s learned to open them.

The first day, she got into the cabinet, I figured we had not shut it but I didn’t see how since it kinda closes by itself if you push it a bit. The bottom shelf, which is a pull out drawer, holds cereal and you know Vince . . 10 kinds of cereal. The next to the bottom shelf, which also pulls out . . heck, I just looked and they all pull out .. holds various crackers for eating with snacks . . like brie or fruit and cheese.

The first time she pulled out all the cereal and she and Speck got into it and ate some and since we weren’t sure which boxes they’d actually had their snoots in, we dumped it all.

Then I made double sure the door was always closed and she did it again. Got into the cereal but also into the crackers.

Then . . I saw her . . she just sticks her little pug nose under the bottom of the door and easily opens it. 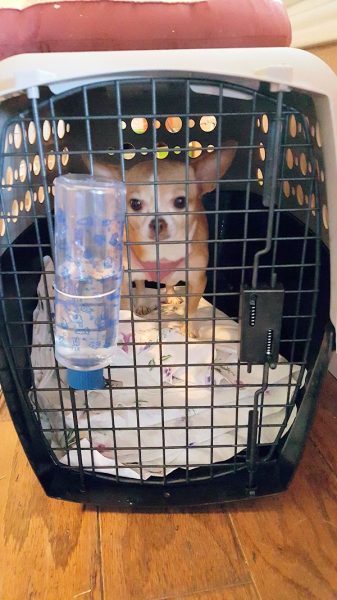 Now, from this day forward, if I’m not in the house with her, she’s in the crate. She seems to be handling it ok. Maybe she knows the alternatives are not good. If I go work in the garden, or go to the sewing room, or we leave home . . she goes into the crate.

What’s funny is Speck loves his crate. He had to stay in the sewing room while Chad and Nicole were here and I never brought his crate back. He’s so trustworthy . . unless Rita tempts him to do something bad . . so I’ve never minded leaving him loose in the house but yesterday I figured I’d bring his crate back, wash all his bedding, Clorox one of the crates that I had used to bring home the feral cats, who by the way I haven’t seen since turning them loose a week ago, and set that up the crate for Rita.

Speck was so excited when I brought his crate back into the house and if he’s not sitting in the chair with me, he’s in his crate. If I take a shower or close them out of the kitchen (he likes to lick the dishes in the dishwasher when I’m trying to put dirty dishes in and I don’t like that!), or we’re at the table eating, Speck goes and gets in his crate.

When I went to put the bedding in Rita’s crate, Speck was so happy. He thought he had two crates and he wanted to get in that one too but I kept him out and put Rita in. I hope some day she learns to like the crate and better yet, I hope some day she becomes a trustworthy dog, but I’m not holding out much hope for that since she seems to be getting worse instead of better.