Tomato planting is about like everything else I do . . no limits . . I never know when to stop. And, Vince contributes to the problem!  🙂

I had three tomatoes that were looking half sick and I was going to pull them out before they infected the neighboring plants. Vince said “Do we need to buy more?” and I said “No! I’ll never miss these three plants!” and Vince said “But, there’s a drip line there!” When we were out later, we went to the garden center for three tomato plants. Think we came home with more? Yep! We bought a 6 pack and then Vince found three heirloom varieties he wanted to try so we ended up with a net of 6 additional tomatoes, which meant we needed more drip spots. 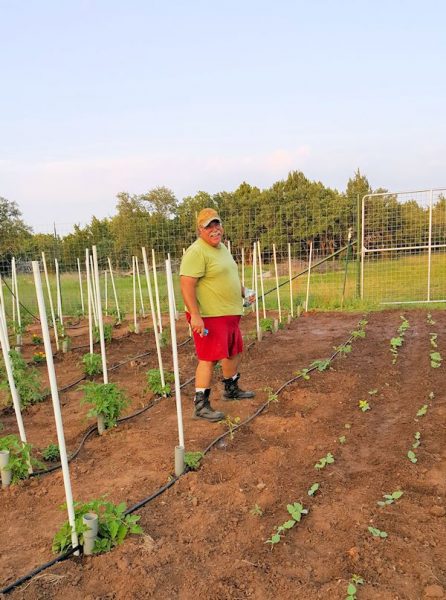 Vince in the Garden

He cheerfully added the little drippers to the line so I’m all set. This is the time of year when I love my garden. The weeds are still under control, there’s been enough rain to keep things from looking so droopy. With the drip lines, and soaker hoses, I’m not having to spend quite so much time watering and everything looks good.

We now have 72 tomato plants! I could say that next year, 50 would be more than sufficient but . . I’m not even going to think it! 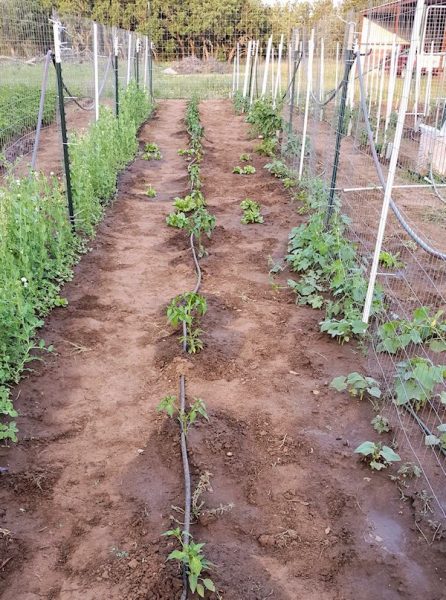 The center (crooked, as always) row is peppers. To the left are sugar snap peas and to the right are various climbing things – several types cucumbers and several types loofah. 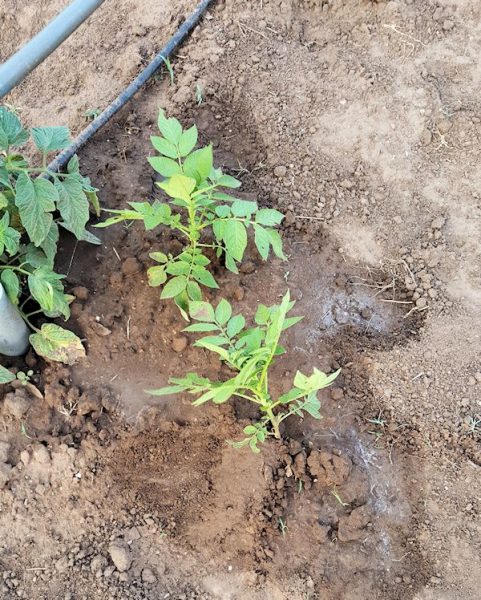 All the things growing on either side of the peppers in the middle of the aisle are volunteer lettuce plants, which are actually doing better than the lettuce I planted.

One funny thing is all the volunteer plants from last year. There’s one cucumber, which is really funny because I planted them late and never got a cucumber but I guess one little cuke made it far enough to produce seeds before withering and falling off the vine.

There are volunteer potatoes in three different spots. There are at least 10 volunteer tomatoes.

One disappointment is my purple hull peas. 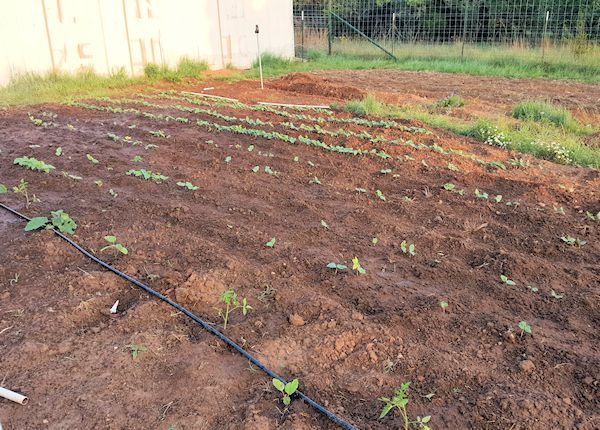 See the 3 rows far to the back? All the front rows were planted with bulk peas from the local garden center, which I thought should be better than using packaged seeds. I thought I had enough bulk seeds but ran out so I grabbed a few packs of seeds I had because I always keep seeds on hand. The bulk seeds came up at best at about 60% of what I planted so I filled in the gap with packaged seeds. Had I planted only bulk seeds, I would have figured the turkeys or bugs ate the plants so I’m glad I ended up using some packaged seeds.

I now remember that last year, the bulk seeds I got from the same place hardly came up at all and what did come up didn’t produce well at all. Lesson learned . .

The garden is a lot of work but I enjoy being out there playing in the dirt and even more, we enjoy the veggies it produces.