It’s so nice to sit at the table or in my chair and look out at the deer but it’s not so nice to realize the deer are sitting in their comfy places watching my peach and pear trees . . just waiting for a yummy snack.

When we first moved here . . we didn’t have a clue what we were doing (not that we do now either!) but we planted 6 fruit trees in front of the house. I think we were thinking maybe a bit of shade some day. There are 4 pear trees (none of which bloomed this year) one sour cherry and one pomegranate. I don’t think the deer will bother the sour cherry, plus it will probably never produce, and I doubt they bother the pomegranate. So, those trees should be safe at least for another year. Once the pear trees start producing, we’ll have to come up with some kind of cage to put around them to keep the deer away.

We also planted 4 trees on the side of the house. 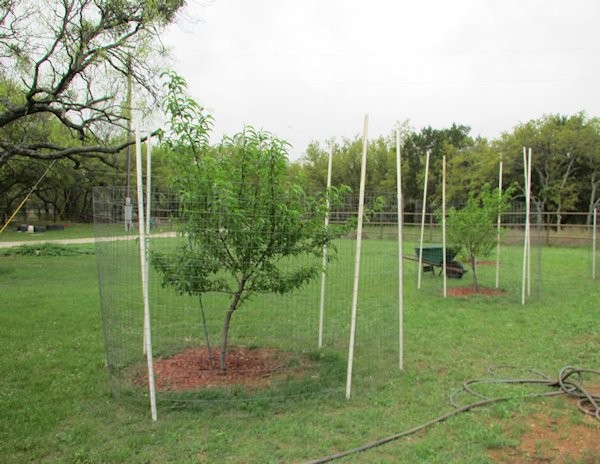 Three of these are the peach trees that are loaded and we don’t want the deer getting all of the peaches so Vince put fences around them yesterday. We’re probably still going to have issues with raccoons and possums but we know what to do about that . . I hope. 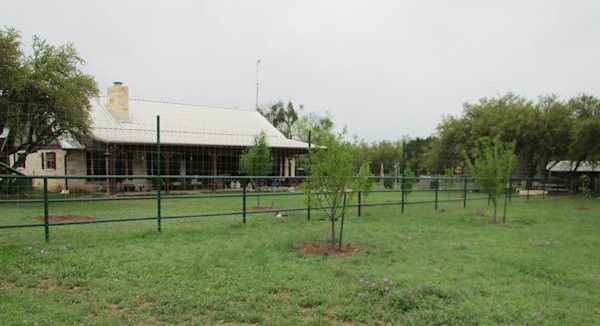 The rest of the fruit trees are inside the high fence and that should keep the deer out.

We have planted 56 fruit trees . . or should I say . . we have 56 fruit trees that are alive. We lost a few but considering the harsh summers and crazy winters, I think we’ve done quite well.

My favorite tree . . and some of you will remember how hard I worked to get this little rascal. I wouldn’t have it except a blog reader located it in California and the guy sold me one little bare root cutting. 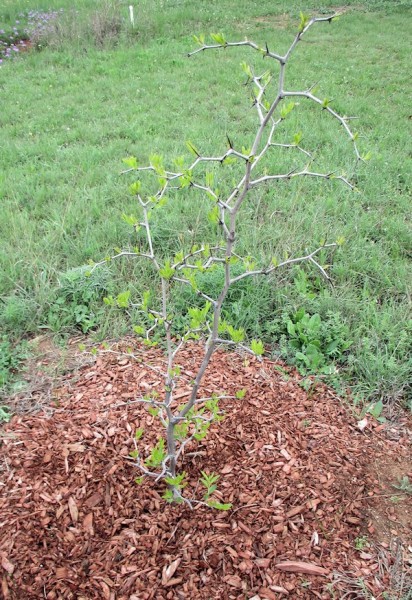 Is that not an evil looking little tree? It was so late budding, I feared it was dead. Vince kept saying “But wasn’t it the last one to bud out last year?” I couldn’t remember but I didn’t want it to be dead. It would be close to impossible to find another Jujube tree.  I wish I could easily find half a dozen more.

Supposedly it’s drought tolerant and deer resistant. I wonder why . . look at these thorns! 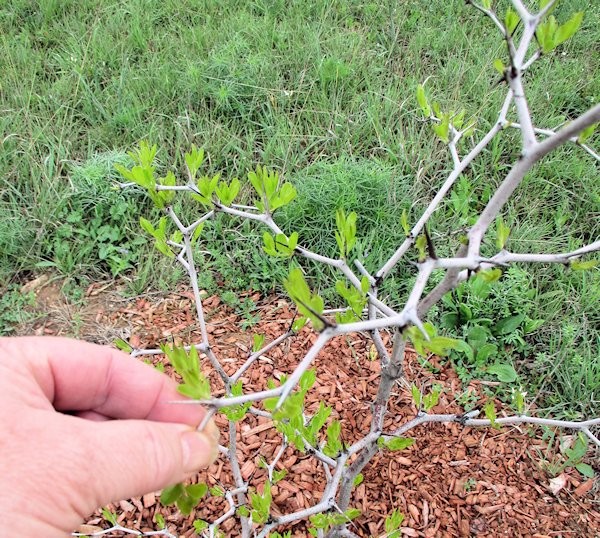 If I were a deer, I think I’d walk right past that thorny tree.

So far, the past two years, each year, it’s produced three jujubes. Maybe it will produce more this year, and maybe at some point in the future I’ll be able to find more trees.