Before the real blog post . . here’s a funny story. My best friend is Sarah and I had told her how much I love my yogurt maker.  Sarah is my age so her dad is about 20 years old. Sounds like a math problem, huh? How old is Sarah’s dad?  Sarah’s dad and his wife love yogurt so she got him a yogurt maker for Christmas. She used Amazon Prime so it got there within 2 days. She was tracking the package and she kept waiting for him to call and tell her he got it but he didn’t call on the day it arrived and he didn’t call on the next day so she called him. What had happened was . . they had seen a man walk by and they thought it was their yard man so they didn’t realize they had a package but he had just found it. I asked Sarah if he was happy with it and she said he was so funny . . he went on and on and about how she could order something that had to be shipped from somewhere far away and then it could arrive in 2 days and Sarah knew it arrived before he did! Technology can be baffling.

I ordered my Instant Pot on Wednesday afternoon about 2 p.m. As always, I was tracking it and shocked to see that it was going to be delivered on Thursday. Sure enough . . just before noon, here came my sweet little UPS guy. He told me that anything shipped from Dallas or San Antonio usually gets here in one day because they have trucks coming from there every day. So, I was kinda like Sarah’s dad . . I still can’t believe it got here less than 24 hours after I ordered it! 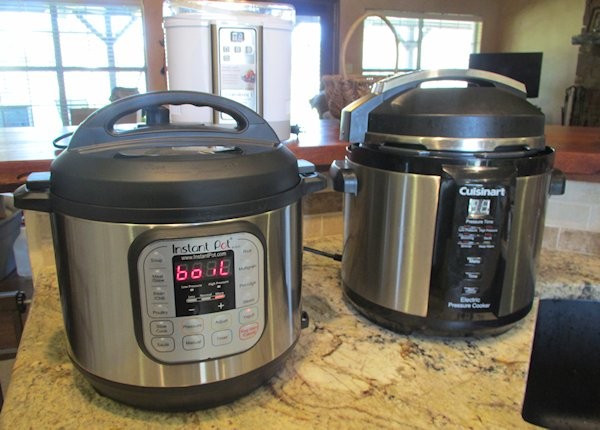 Here they are side by side. The Instant Pot definitely has more bells and whistles than does the Cuisinart but do I need all those bells and whistles? Probably not. Here’s where I’m impressed and I’ve only used it once to make yogurt. I probably shouldn’t tell this because you all know I’m getting old and forgetful but it seems that I’ve lost my ability to bring a pot of milk to 180º without screwing up the first batch. Not last time but time before that, I totally forgot about the milk on the stove and it got to about 225º. I figured . . I’ll try to finish it and if it’s not right, I’ll dump it but it seemed to have worked ok. The next time, I said to myself . . I’m going to stand right here and watch til it gets to 180º. Vince was outside working and he came to the door and asked me to bring him some ice water. I went to the door, stepped outside to hand him his ice water . . and it was downhill from there . . I walked out to the garden, I gathered eggs from all the chicken coops, I came in about 20 minutes later to a scorched mess.

Yesterday morning I was busy doing other things in the kitchen so I said  . . I can make yogurt and since I’m right here in the kitchen, I won’t screw it up. I was chopping onions with my back to the stove when I heard something weird. Hmmm . . the milk was way overheated and had boiled over and made a huge mess on the stove. 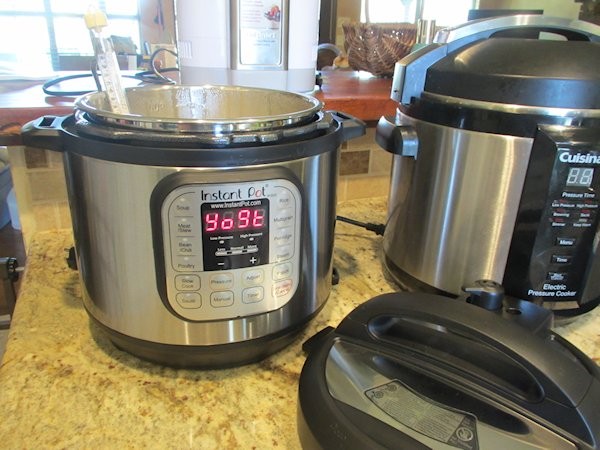 Yes, the Instant Pot . . I pour the milk in, hit the yogurt setting, do something else to get the display to read “boil”. It reaches 180º, it shuts off and so long as I remember to stir in the starter when it gets to 110º, everything should be fine. From there, I pour it into the yogurt maker and that does the rest.

Once it gets to 180º, it beeps and the display says “yogt”. (It must know how forgetful I am and figures I can’t remember what’s in there so it tells me . . yogt and I’m supposed to know that’s yogurt!)

I’m going to read the user manual some time today . . you know . . the one that says to read it before using it.

Vince saw it and said “Where are we going to put that?” Heck if I know.