We are so pleased with Longhorn Solar (Austin, Dallas and San Antonio, Texas). We have a friend who has a friend who put in a system with a different company and they have had lots of problems with their system and are pretty much unhappy with it. I can’t imagine spending that much money and being unhappy with the investment.  There are many good companies out there so if you decide to go with solar, do your homework. Vince researched the heck out of solar companies before deciding on Longhorn.

The only problem we’ve had is this . . there’s a little wireless gizmo that transmits everything about our solar system to some company that reports it all online so at any time, we can get on our computer or iPhone and see how much power each panel is producing and the totals, as well as the history of each panel and the total system.

Today was not a good day to show this because it’s raining and cloudy. 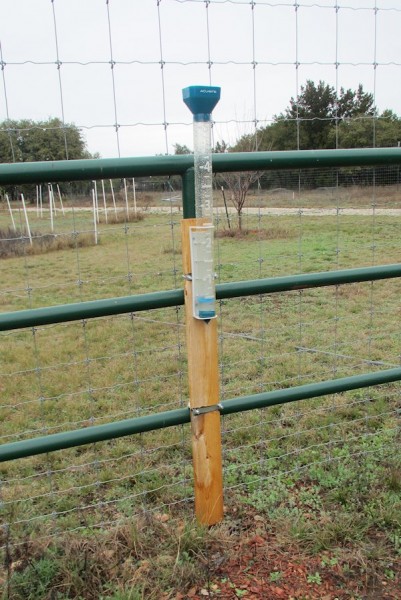 We’ve had almost 1/2″ rain already today. That’s a gully washer in these parts!  🙂 We can’t have both .. good solar production and rain and we’ll take rain any day.

Back to the solar reporting, the little wireless gizmo is a third party component that Longhorn buys and apparently they just don’t hold up. Most of the time, Longhorn noticed it wasn’t working before we did. It involves unplugging the broken one from the internet and plugging in the new one. Vince offered for Longhorn to leave them here and he would do it so they don’t have to send someone from Austin but they insisted . . that’s part of their warranty work. They finally gave up on the wireless gizmo and last week, a guy came and spliced into our internet line and hard wired another reading/reporting device and he said that one will work nicely for us. They always try the wireless device because it’s easier and holds up fine for some systems but because ours is all out in the shop without heat or air conditioning, it was just a little much for the wireless device.

So . . about our production. This screen shot shows how many kwh we’ve used (purchased from the electric company) since getting the solar panels installed. 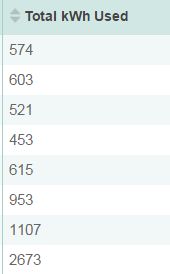 I started to crop it out but if you notice the bottom number, 2673 kwh were used on the bill we got in August. The company that reads our meter had not been able to figure out how to report our usage so in August, they finally got it right so that number represents our usage for May, June and July. The September bill, 1107 kwh, was for 40 days instead of 30 and by the time the October till (653 kwh) came around, they had it all figured out.

It isn’t easy to figure out how much we’re saving because the numbers shown above represent only the kwh we purchased from the electric company. We have to read the solar panel meter to know how many kwh we produced and then subtract how many we sent back and that tells us how many we used.

We also pay about .10 per kwh for using the lines. We only pay that on the kwh we buy. We do not pay it on the power we generate nor on the power we send back. This is our line charge for the current bill.

Here’s how we calculate our savings:

Last month we purchased 574 kwh.
We used 524 kwh that we produced and sent the rest to the utility company (It was a cloudy, rainy, icy month).
That’s a total of 1098 kwh.

The panels themselves have a 25 year warranty and the inverters have a 10 year warranty. IF electric rates stay the same (and who expects that to happen?), after 7 more years, we will have recouped our investment, and any savings will be money in our pocket.  Even once the solar panels have paid for themselves, there’s still the added value to the property by having them.

This was a great investment for us and we’re 100% happy with it.