Today’s blame goes to the good folks at The Loopy Ewe! I’ve become so enamored with stranded colorwork (knitting with different colors .. instead of a solid piece). I’m almost to the bottom of my Pixelated Pullover. It still needs sleeves so it will be a while before it’s finished . . especially if I put it aside to work on something else!  🙂

I’ve also cast on Taiga but have only done the top ribbing.

Then . . I saw this blog post at The Loopy Ewe. I don’t know how I had missed that post when it was first published . . I thought I watched that site like a hawk! I kept telling myself . . don’t do it. Do not go down that rabbit hole! My very good reasons for not doing it were: 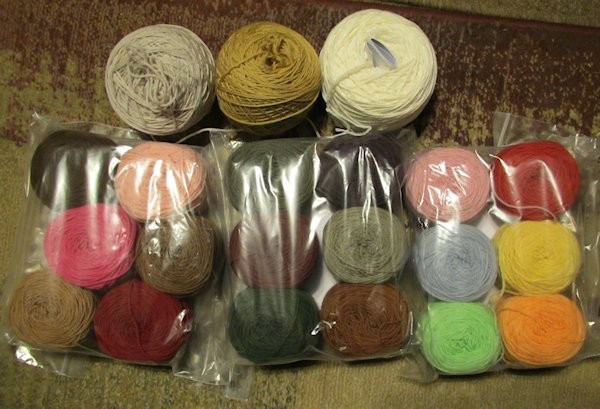 Yes, a horrible picture but it’s not daylight yet and I didn’t want to take the yarn out of the plastic because I want to keep up with which skein is which color. I ordered Loopy Cakes in the following combos (left to right).

The larger skeins are Putty, Khaki and White.

I told myself I was going to finish the Loopy Academy cowl and the Pixelated Pullover before starting this cowl but . . I’m not. I’m going to get off the computer and cast on. I’m going to do a little bit each day . . or, I’m going to stay up for 5 days and nights and finish it NOW!  🙂

Doesn’t it look like a fun project? You see why I couldn’t put it off, don’t you? I knew you would agree with me!