I don’t think there’s anything Vince can’t fix. About 95% of the time, that’s a good thing but even when things are so far past the point of being fixed, he keeps tinkering with them. And, he never ever throws anything away because he might need parts from it to fix something else. 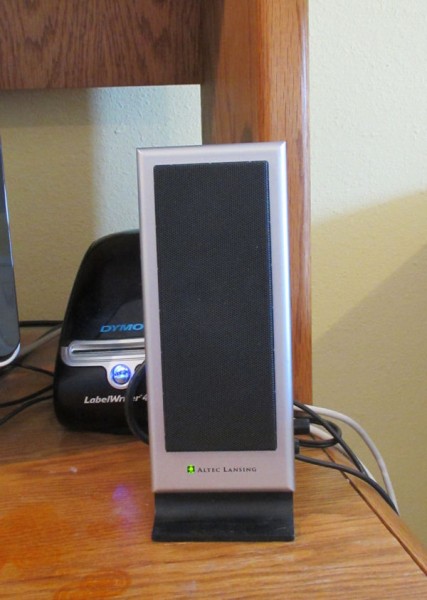 These computer speakers are old and probably terribly inexpensive but they work fine for what I need . . most of the time. They did sit on top of the upper part of this computer desk. Yes, the desk is ancient too and Vince keeps wanting to get rid of it but I’ve had it forever and it’s wood and it also serves its purpose. I think I’ve had it at at least 10 different houses. I bought it at Sam’s Club when I bought my first computer in about 1992.

But, one of these speakers has stopped working and would only work if I wiggled the wires and then held it a certain way. When they sat on top of the top part of the desk, Boots kept knocking them off so I should be happy one of them still works.  I listen to Pandora a lot in the sewing room so I need all the speakers working. Speaking of Pandora, I guess I signed up for the account when we lived in MO and many of the ads are MO related. MO Farm Bureau and now . . they want me to buy a MO lottery ticket.  Dude, don’t tempt me! I just got back and I’m ready to go again!

Vince walked into the sewing room and I said “Can you please fix this?” and explained what was wrong. He said “Judy . . we have plenty of speakers. I’ll just grab another pair.” Knowing that he would never get rid of these, and they’re slim and don’t take up much room, I said “I know you can fix them” and showed him how I had to hold the wires for the broken speaker to work. Yep, he fixed it in about 2 seconds.

Lucky for our relationship, that’s the end of that conversation. I’m rather sure he would like to say more but thankfully, he does not!  🙂