The plan was that I was going to leave Missouri Monday (yesterday) but Vince was watching the weather (I was too but he was getting a bit more anxious than I was) and he called me on Thursday and said “Are you watching the weather?” Yes!  He had talked to a friend at Springfield and she was telling him that they were expecting snow and ice to start early Sunday morning. When planning my trips, I make sure I’ll be driving when there’s no rain or snow and when it’s been warm and sunny for several days before I’m driving so I’m not driving through snow. It gets all over the windshield and I can’t see . . and from looking at the weather in Joplin, Oklahoma City, and Tulsa, I knew that I needed to leave on Saturday or I’d probably be there til Wednesday or Thursday and I knew that almost two weeks from home would mean Vince was really struggling to keep up with the chickens, two dogs, a cat, 3 bins of meal worms and 2 containers of red wigglers, along with moving seedlings in and out (there’s still no heat in the greenhouse but that’s not my fault!) plus watering the garden so . . Saturday I left MO and had great traveling weather.

I left their house about 7:15 a.m. and was almost to I-44 (about 30 minutes from their house) and I happened to think . . did he get the title, registration and insurance papers out of my car. I called . . nope! We had all talked about it on Friday night but we all forgot on Saturday morning . . so I turned around and drove back and got to get one more hug and kiss from Addie!

When I’m going to MO, this is my first pit stop — a McDonald’s out in the median of I-44. When I’m coming home, this is . . hopefully . . my last stop. When I was going to MO, I pulled in and thought “WOW! There’s no one here!” Then I realized it was closed. 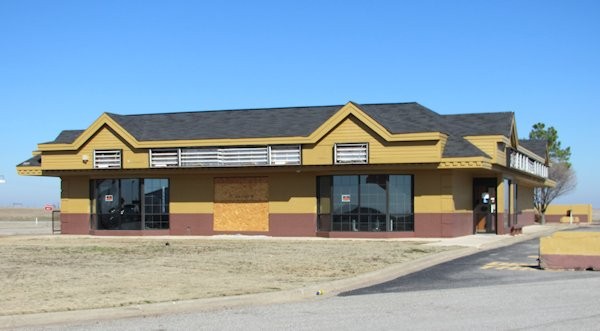 Knowing that I needed to find another stop, I pulled into a welcome center and when I was washing my hands in the restroom, an older lady was also washing her hands and I guess I sighed.

Older Lady:  You tired?
Me:  Not really . . just have another 4 – 5 hours to drive and the rest of the trip is more back roads than interstate.
Older Lady: Where are you headed?
Me: Brownwood, Texas
Older Lady: Me too!
Me:  REALLY? BrownWOOD and not BrownsVILLE?
Older Lady: Nope . . Brownwood. My daughter lives there.

Then, poor lady, she asked me what exit I take off I-44. I guess my look said it all because she said “nevermind!” I explained that I use GPS and just do what it tells me and, though I halfway know which exits to take when I see them, I surely couldn’t tell you highway numbers or exit numbers.

Her other daughter was driving so I stopped and chatted with her. They were parked right next to me. They had maps . . no GPS.  She had the next few highway numbers written on her hand. I said “Do y’all want to follow me?” YES! I told them that it would be hard to stay right together going through Lawton and Wichita Falls but we all figured out which exit they would take off I-44 and I told them once I got off I-44, I would wait for them. I did and they followed me to Brownwood. I stopped once in Graham to ask them if they needed gas or a bathroom break in Graham or Cisco and they were fine.

They told me where their sister/daughter lived and it’s the road before my highway so they followed me all the way to her road. They were so thankful to fold that map up and put it away.

They live in a city in Wisconsin and apparently they don’t travel much where the speed limit is over 55 mph and the lady driving told me that the 75 mph scared her. I told her just to drive it for a while and she would feel more comfortable with it. The roads are excellent with wide shoulders and there’s hardly any traffic. She kept up with me and it was kinda nice to have “company”.

Once I talked to Vince and he asked how the trip was going. I told him I was driving a bit slower than normal because someone was following me. He said “What are you going to do about it?” Then I explained that they were supposed to be following me and he was all concerned that I had picked up strangers. I was 100% confident they were nice people. They were in their own car. I knew I had more gas than they had and they had given me the name of their family in Brownwood and told me where she worked so I wasn’t worried at all.

I have to assume that helping them get to Brownwood is why my trip got delayed by an hour. They would have made it fine without me but it was easier to follow someone who had GPS and made the trip often.