You know me . . whatever I’m doing, I jump in 200% and go hog wild with it. Right now . . it’s bluebirds. They’re so gorgeous and when a little glimmer of sunlight shines on the male, the beauty takes my breath away. 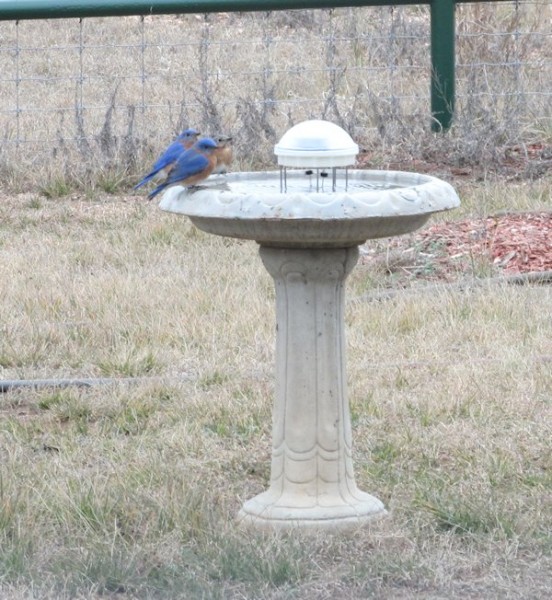 Mostly l I’ve been taking pictures through the back door glass so none of my bird pictures are great. As soon as it gets a little warmer, I’ll set the tripod up on the porch and sit out there and try to get some good pictures.

In Texas, having some kind of ag exemption is pretty imperative to keep our property taxes reasonable. The previous neighbors had kept cows on our land and we were able to have our ag exemption due to those cows but then they sold the cows and they moved. We don’t want to have cows . . for so many reasons. First, we don’t have a clue what to do with them. We don’t have a full size pickup or a stock trailer. Probably most important is that we have no water for them – no ponds and we don’t need to be running that much water out of our well. So, having cows isn’t a good idea for us. I would love to have goats but we don’t have fences for goats and by the time we spent the money to put up the fencing, we would have spent more than we would save on our property taxes . . not to mention that I’m not sure either of us could deal with about 24 goats.

Last year, when it was time to come up with a plan, we met with a wildlife biologist and decided to go with a wildlife exemption for attracting and improving habitat for bluebirds. We had to choose some kind of “animal” that we saw around here already. We talked about choosing quail but the success rate of releasing cage raised quail into the wild was terrible . . like 20%. Our closest neighbor chose turkeys so we went with bluebirds. We had seen a handful of them around here the first year we were here but then we didn’t see many so I was afraid they had left. They can migrate but in this area, if conditions are right (water, food supply, not too many predators), they will stay year round.

We’ve been working hard over the past 8 months or so, and the within the last few weeks, we’ve seen so many bluebirds, so I hope our work is paying off.

Part of our plan was to build and put up 16 birdhouses. You can imagine that I’m saying “we” but Vince is mostly the one doing the work. He had plotted out where all the houses would be. 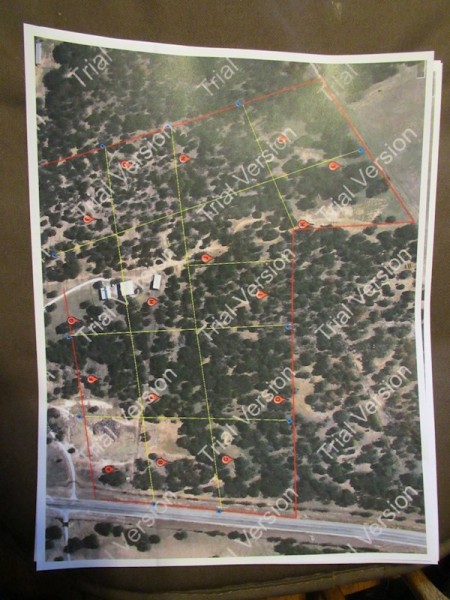 You can see that some of them are deep in the woods and I don’t go out and deal with those by myself. I’ll check the ones that I feel safe checking but Vince goes with me to check the ones that are too far into the woods. After seeing the bobcat, I’m a little apprehensive about being too far out by myself, even though I always have “protection” with me.

This past weekend while it was warm and sunny, Vince went and retrieved all 16 birdhouses, cleaned them all, brushed them down, waterproofed the cedar and added a white reflective film to the top. 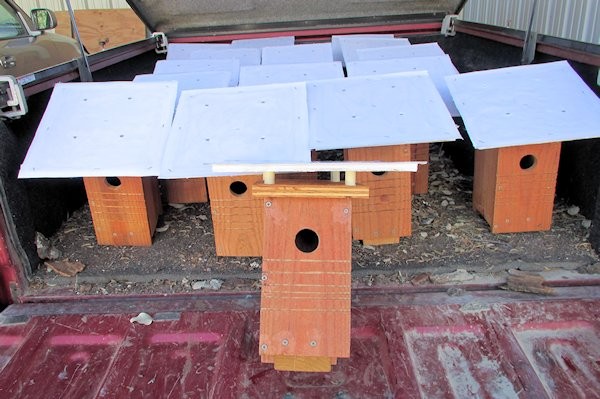 There are some pretty detailed guidelines about how the houses are to be built . . dimensions, openings, doors that open for cleaning, which direction they face, etc. I think it’s so cool that they have the little space between the top roof and the “sub roof”. That’s to help them not get so hot.

The bluebirds love mealworms so between the chickens and the bluebirds, I’m not able to grow enough to keep them fat and happy so I ordered more mealworms and will get two more worm beds going.

Last year we didn’t have our houses up in time for them to nest in our boxes so I’m so anxious to see if we get any residents this year. They should begin building nests soon . . either in our boxes or somewhere else. Vince has forbid me to peek into the nests more than once a week so I have been using the binoculars quite a bit. There’s a box I can see from the front porch and a box I can see from the garden.