I was trying to go back on the blog and search to see if I had already shared this story and I found this post from when we had a cat living in our garage in MO. It was not friendly and this was Chad trying to convince Mr. Kitty to come closer.

Yes, we had a big dumpster in our back yard.

I don’t see where I’ve already shared this story but if I have, please remember .. I’m getting old! 🙂

You must first know that Chad and Nicole can’t have pets at their apartment. At Addie’s other grandma’s, out in the country, they always have pets – dogs, cats, chickens, ducks, rabbits. Their mama cat had kittens a while back.

One day the maintenance guy had to come to Chad’s apartment to work on something. As he was leaving, Addie looked at him and said “Be careful for the kitty!”  Nicole said she and the maintenance guy both, at the same time said “What kitty?” Addie was off  . . she had said what she had to say. Nicole was trying to convince the guy that there was no kitty!

I can just hear Addie’s other grandma saying to people as they leave . . be careful for the kitty.

Yesterday I was video chatting with Addie. Chad was home and I was talking to him so when it was time to go, Nicole told Addie to go tell Granny bye. She walked over to the iPad . . I was saying bye and she said “Bye . . Be careful for the kitty!”

I crack up every time she says that and I think it’s just the standard line for her now after she says goodbye to anyone. 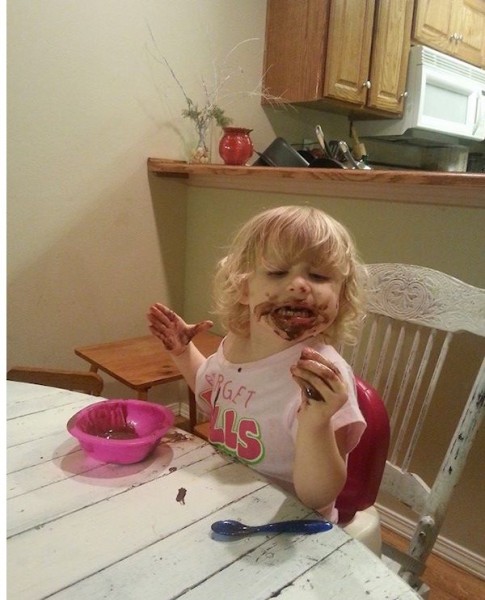 Obviously she found something work checking out in her ice cream. Look at that face!

And don’t forget . . be careful for the kitty!