It was almost exactly a month ago that I came home from the grocery store to find a hungry little chihuahua rummaging through boxes in the carport looking for something to eat. As soon as she saw me, she ran into the woods. For about a week, we could catch a glimpse of her and she would run into the woods. I left dog food out but she never came back close enough to eat it. While I was gone to MO, Vince got a glimpse of her and he set a trap and caught her but while trying to transfer her to a kennel, she escaped and to quote Vince . . “she ran like a bat out of hell!” Over the next few days, he enticed her closer and closer to him until he was able to pet her but not pick her up. He made her a bed in the barrel of an old wet/dry vac and she slept there for a few nights. Then he bought a huge kennel (the size for a retriever!), put it in my sewing room and she slept in there for about a week. Then we decided she could sleep in a smaller crate in the house. After a few nights, we decided she was trustworthy enough to sleep on the sofa . . which has a slip cover and an old blanket.

She’s gone from staying outside all day and coming in after dark to staying inside all the time, except she goes out with us when we go out.

I had to laugh . . I’m sitting in my chair knitting and I looked over on the sofa to see this: 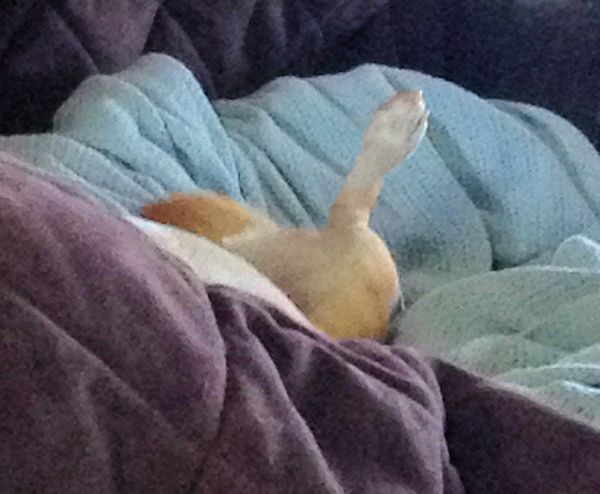 Sound asleep on her back with her leg up in the air. I guess the cell phone clicking interrupted her sleep and she stretched a bit before falling back to sleep. 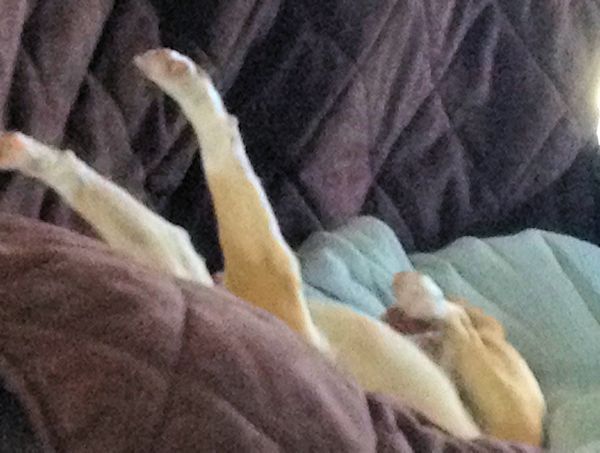 She’s pretty comfortable with her new home. I’m thankful that wherever she came from, she was already house trained, she knows basic commands and except for being just a bit bossy with Speck, she isn’t a hard dog to have around.