For three years I’ve been asking for a greenhouse. For 8 months, a Mueller Steel Building greenhouse kit for a 12′ x 18′ greenhouse has been sitting under the implement shed. It was too hot to work (according to Vince and his building buddy) but they promised they’d get started once it got cooler. I guess the unanswered question was . . how much cooler does it have to get? I’ve seriously been hounding Vince about getting it done and now that the fresh tomatoes from the garden have ended, and he’s lamenting that homegrown goodness, I keep saying “If I had a greenhouse . . we would have fresh tomatoes all year!”

This morning we got the corners all marked off and I think sometime soon, I just might have a greenhouse. 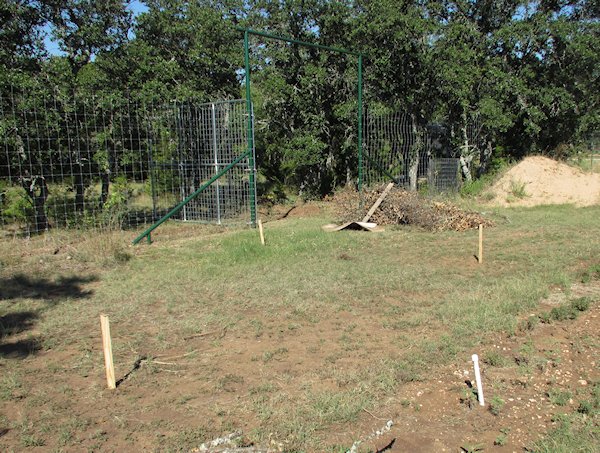 Vince has a friend who’s an electrician so he’s coming tomorrow to run power to the greenhouse and the new chicken coop. Vince is out digging the footer for the greenhouse now, and he’s already finished digging the trench for the electric line.  We won’t need a whole lot of heat out there but we’ll need some. We’ll have propane for the heat, or he may use a rocket stove type setup if we have several days of cold like we did last winter. We’ll use electricity for the big fans and lighting out there . . though I’m not quite sure why he thinks we need lighting as I don’t plan to be out there after dark!

The concrete guy is supposed to come to pour the footers (or whatever you call it) and then the guys will commence to building the greenhouse! 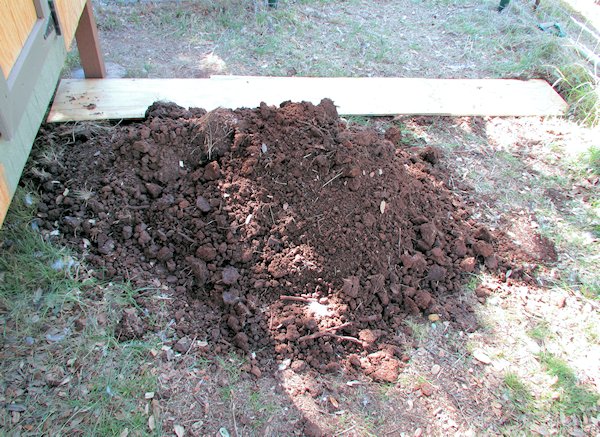 The new coop has never had electricity run to it so the electrician will fix that all up tomorrow too. Vince dug that trench and every time I see how good our dirt is and I think how bad most of the dirt is in this area, I want to do a happy dance. We had a whole list of things we wanted when we bought a house here and good dirt was not even on the list but with all the things we do and grow, having good dirt is such a blessing. Most of the dirt around here is just bad dirt and so fully of rocks that it would be almost impossible to clean out a spot big enough to have a decent garden.

Progress . . slowly but surely, we’re making progress. I think I’m going to go out and plant a few tomato plants in cups and then, if the greenhouse does get finished, I could have fresh, home grown tomatoes in January or February!