Becoming a two dog family has not been easy. Rita lived in the woods for at least a week before Vince caught her and made friends.  Then for a week, she was an outside dog. She loved being outside. She chased grasshoppers and ran circles around the house and followed Vince everywhere he went. I coaxed her into the house last week but she wasn’t comfortable inside. She would not get on the furniture and when I put her in the chair with me, she immediately jumped down and thought she was in trouble. How things have changed! I should have left her outside but winter is coming and it would be too cold for her to stay outside. Even with her sleeping in the sewing room, I worried that the UPS guy might run over her or a vulture or hawk might get her during the day while she was out.

We’ve tried to get Rita and Speck to become friends. I had Speck at the vet last week for his shots and nail trim and I asked them what else I could do to have more peace around here. They think there’s a good chance he will ever get used to her. He’s been the only dog for 14 years, he isn’t friendly and he probably isn’t going to change.

No matter which one we put in the kitchen with the baby gate, Speck is barking and trying to attack Rita. For the most part, she ignored him . . til Friday and she got right back in his face and barked back. Great . . now two dogs are barking. We keep them in the house, separated by the gate, both barking, as long as we can stand it and then we put Rita out. It’s been cool enough that we have our windows open and wouldn’t you know it  .. Rita goes from window to window howling . . wanting to come in. I’m about to give up and say both of them are going to the pound!

We decided that in order to keep the snapping and biting down, and hopefully have no injuries, we’d put a muzzle on Speck and let them get to know each other. Speck, of course, was not happy and ended up going and hiding. I think he was embarrassed . . and he should be. He really wants to hurt Rita. 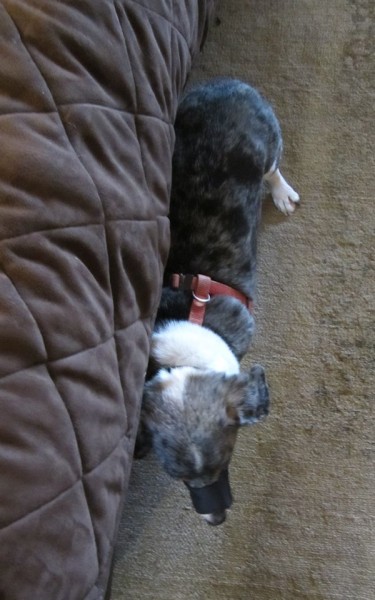 But, with Speck hiding, there was no interaction. 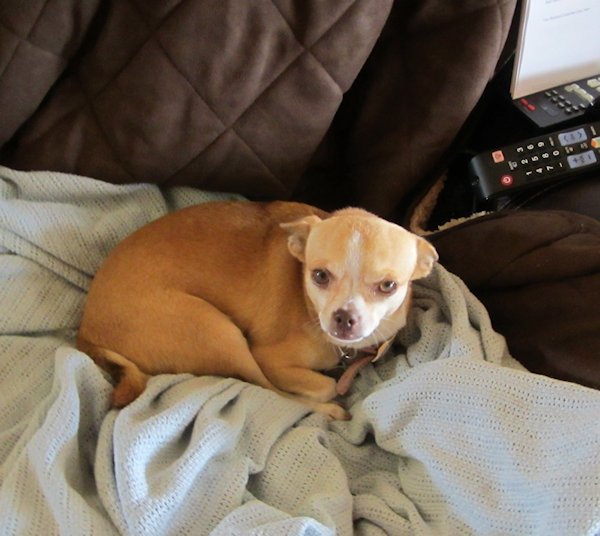 Shy, timid little Rita has decided she owns the place, that she is staying inside, and that she will rule the roost. For a while, Rita was sleeping on the sofa, Speck was sitting in the chair with me, and I think neither realized the other was there. After an hour or so, Speck noticed Rita and he began barking. Rita, not being intimidated at all, came right over, jumped up in the chair with Speck and me, and she began barking at Speck.

We did not need two dogs but we didn’t ask for the second one. Speck is 14 and probably won’t be around more than a couple of years but a couple of years of this kind of frustration may mean Judy isn’t around much longer!  🙂

I kinda long for the good old days when I could go into the sewing room, without having to dig through inches of cat hair, and then fight with a cat while trying to do anything in there; or when I could relax inside the house without trying to play referee between two feisty/grumpy dogs.

It will get better, right?