One of the things Addie says that just cracks me up . . and I think you have to see her facial expression but she puts so much feeling into it . . any time something isn’t quite right, whether it’s a toy out of place or she spills something, she will say “Ohhhh, nooooo! What happened?” I caught myself saying that today.

On September 22, there was a hiring seminar for the new Aldi. I suppose I definitely need to get a life when I’m this excited about a new grocery store, right? With a hiring seminar in September, I was thinking they might be opening towards the end of October.  I kept asking Vince “Have you been by there?” No . . he isn’t excited about it at all. I’d ask him “Can’t you ask someone at work if they know when it’s opening?” Nope . . he doesn’t care enough to even ask.

Today I had to:

There are several car washes around town but one happens to be real close to the new Aldi store so that’s the one I chose. Then I drove by the new Aldi .. expecting to see the shelves fully stocked, just waiting for the Grand Opening. Instead . . I saw this: 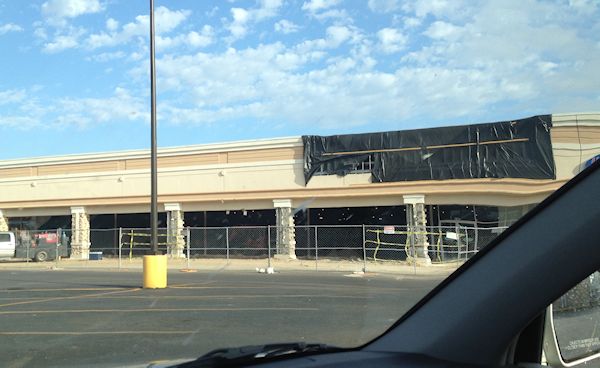 What the heck? It’s going to be months! I was talking to a lady at Wal-Mart and she said she heard it would open in February. Are you kidding? They have the best cookies and interesting foods at Christmas and I was really looking forward to that. I guess I won’t be getting anything from this store for a while.

No wonder they don’t have a date on their website for our grand opening.