LeCreuset cooking and baking vessels are expensive and I’ve never been willing to spend that much, when in my mind . . pyrex will do . . but after we moved here, and figured we wouldn’t be moving again (maybe) and Chad was no longer cooking in my kitchen, I decided to invest in a few pieces of LeCreuset. One of the pieces I got was this 4 quart square casserole. I haven’t used it much, mainly because during the summer, I don’t use the oven so much.

After maybe 15 minutes in the 375º oven, I heard a little ping. I thought . . that almost sounded like a crack, but I left it alone. About 10 minutes later, I heard a loud ping and I knew it had cracked!  I carefully removed it from the oven and set the whole dish inside a larger baking dish and let it cool a bit. I didn’t want hot food splattering all over me or the kitchen. One of the corners had cracked but the whole pot wasn’t shattered or anything.

I was pretty upset because that was one of the most expensive . . if not THE most expensive cooking pot that I have.  Once it cooled and I removed the food from it, I wiped it out and decided I was going to get rid of the evidence before Vince knew what happened. I did not want to hear what he had to say about my expensive pot cracking. I stuck it in a black trash bag, added some old magazines and newspapers on top and put it in the trash.

Then I decided I should check the LeCreuset warranty and after reading it, decided to call them. I knew I had bought the pot since moving here so I hadn’t had it more than 5 years. I thought I had ordered it from Williams-Sonoma but it was not in y order history so I guess I got it from somewhere else. The nice lady at LeCreuset told me that they did not need my receipt . . just send the casserole and lid back to them and they would inspect the cracked pot and decide if it had failed due to a defect. I dug it out of the trash, stuck it in a box, printed a label and handed it off to my mail lady on September 18. The lady told me it would take 4 – 6 weeks for them to get back with me. If the pot was deemed to be defective, they would replace it. If not, they would offer a replacement at a discount.

In less than two weeks, a new dish arrived at my doorstep. 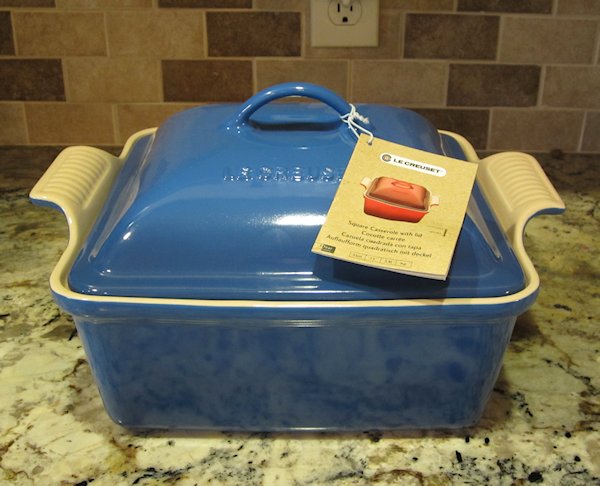 I was so happy to get it! Same color as my original dish too. This size is so perfect for roasting a chicken and that’s exactly what I did last night . . roasted chicken in the new pot!

It’s a good thing I didn’t leave it in the trash and let it get thrown away! I’m real pleased with LeCreuset’s customer service.