You might wonder why folks would take the time to can dry beans. We love beans – pinto beans, red beans, black beans, navy beans, garbanzo beans, black eyed peas . . any kind of beans but sometimes I don’t cook them because even using the pressure cooker, it takes longer than opening a can and heating them up and it doesn’t make a lot of sense sometimes to cook just enough dry beans for one or two meals but if they’re canned and almost ready to heat and eat, we eat them a lot more.

Friday morning I was awake before 5 a.m. and was thinking I’d like to get some canning done. I knew Vince wouldn’t be awake for almost an hour and I didn’t want to wake him so I grabbed the iPad and was quietly reading. On one of my canning groups on Facebook, there was a discussion about canning dry beans so I knew what I was going to can . . dry beans. I’m on a wonderful canning group on FB . . mostly people I went to high school with but a couple of the guys (Steve and Rodney) are amazing and very experienced canners and I can always get an answer from them and I trust their advice. I asked a couple of questions about their method of canning beans and I was ready to get started.

Once Vince left for work, I went over to the sewing room and dug out some beans that I had meticulously vacuum sealed . . back in 2010.

First, they were sealed in Foodsaver bags with an oxygen absorber. 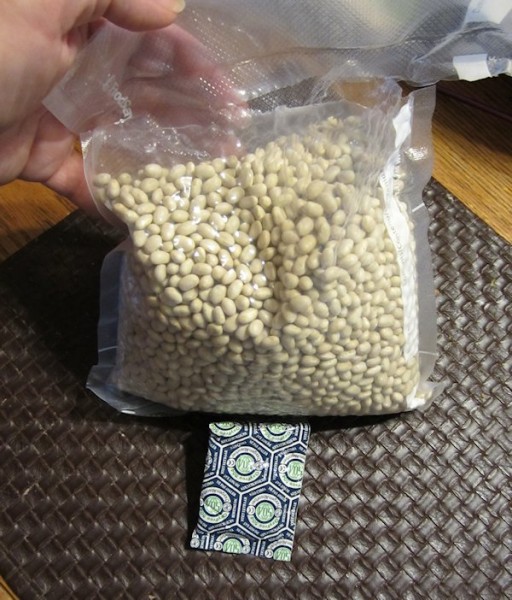 Then they were sealed in mylar bags and labeled. 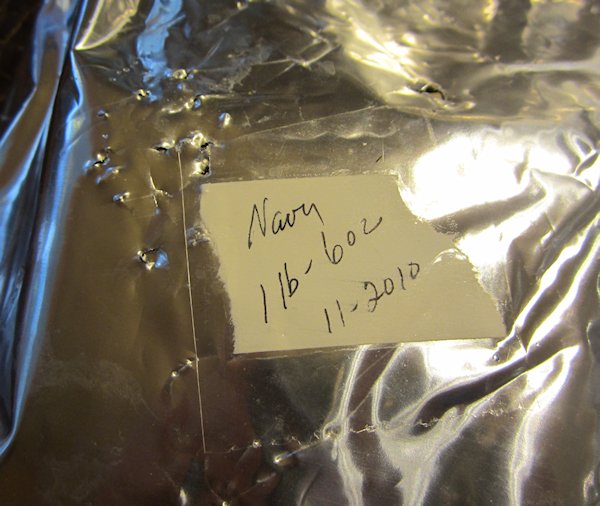 After I got out the beans I wanted to cook, I heard the chickens squawking so I went out to check on them and, as you can see, Boots decided to chew through the mylar bags . . on all 6 packages of beans I had removed from the bucket. I’m not sure I had planned to cook almost 8 pounds of beans but that’s what I did . . thanks to Boots having chewed into them.

The beans were washed and left to soak while the broth in which they would be cooked was simmering. 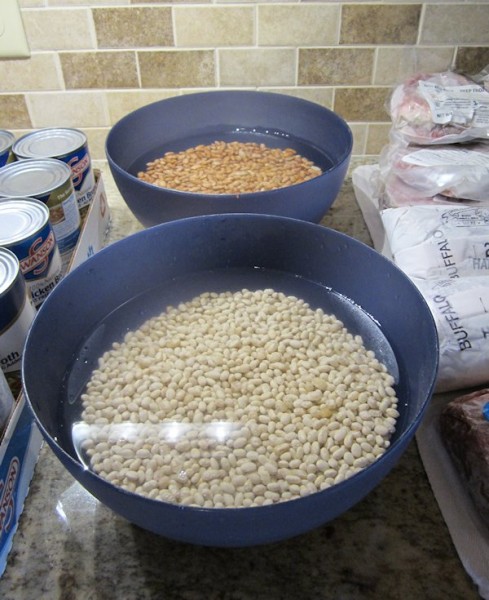 Make the broth and season it as  you would if you were cooking the beans to serve. Think how good your beans will be when they’ve been pressure canned with seasoned broth. For the pinto or red beans, for some, I used tasso, for some I used smoked brisket. When we smoke a brisket, after it’s cooked, I trim off the fatty parts that no one is going to eat. It has that wonderful smokey flavor, with just the right amount of fat because a lot of the fat has drained out during the smoking process. I freeze those chunks and then add them to the beans. For the navy beans, I used smoked ham hocks. For the red beans, I use smoked sausage. Use whatever meat is desired . . or, if no meat is desired, use no meat.

I brown the sausage to get the grease out. If there’s too much grease, I’ll drain some of it off. Then I take out most of the sausage and leave just a little in the pot. The reason I take most of it out is because it’s to hard to get it all divided correctly among the jars when it’s mixed in with the broth so I put the sausage in a bowl and then I can get it divided fairly evenly among the jars. 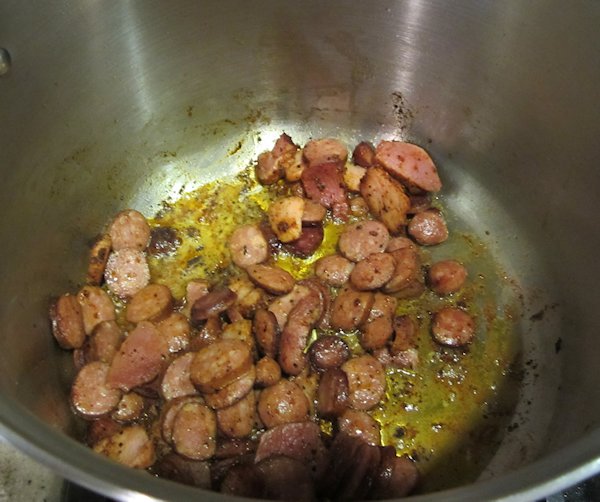 I make the broth by adding a little oil to a pot. Add onions, garlic, peppers . . whatever you want, saute that, add chicken broth or water, along with the seasoning meat and simmer for at least 15 minutes. 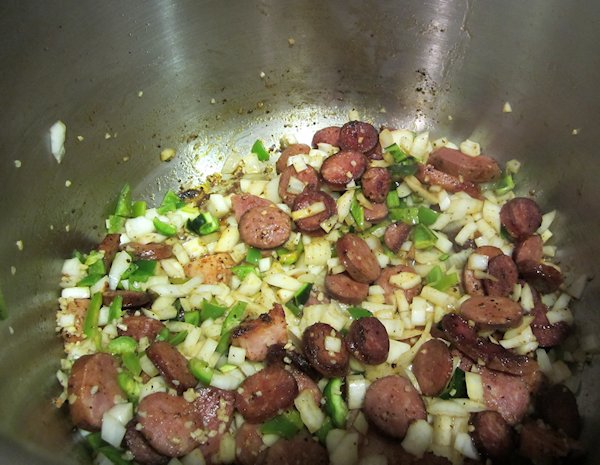 Add the cooking liquid. You can either add water or broth, or mix up your own broth using something like “Better than Bouillon”. If adding anything besides water, be careful about how much salt you add to the jars since canned broth contains salt.

Drain the beans and add to the broth. Simmer for about 15 minutes. The beans will still be quite hard. They are not supposed to be cooked.

For the canning process, use the proper procedures for sterilizing jars, lids, etc.

Using a slotted spoon, fill the jars about 2/3 full of beans, then add the broth, leaving 1″ head space. 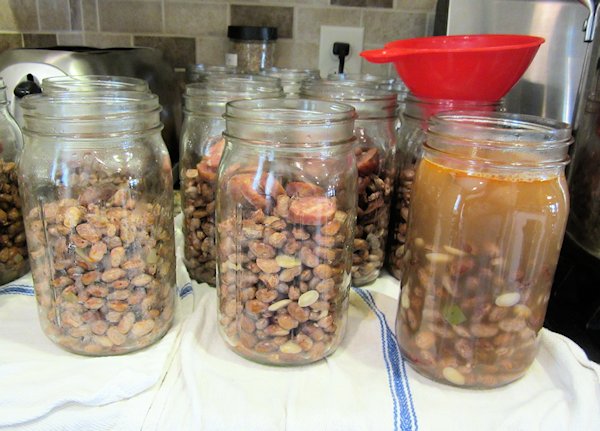 In the photo above, look at the three jars in front. The left jar has just bean, a little sausage and onion mixture that were dipped from the pot. In the middle jar, I’ve added sausage that had been placed in the bowl earlier and in the right jar, I’ve filled it with broth and it’s ready for the lid. While in the canner, the beans will continue to cook and will be plump and ready to eat after their trip through the canner.

Beans must be canned in a pressure canner. A water bath will NOT be sufficient for beans, whether you’ve added meat or not. Always use a pressure canner for beans!  Process pints for 75 minutes and quarts for 90 minutes. Make any necessary adjustments based on your altitude. 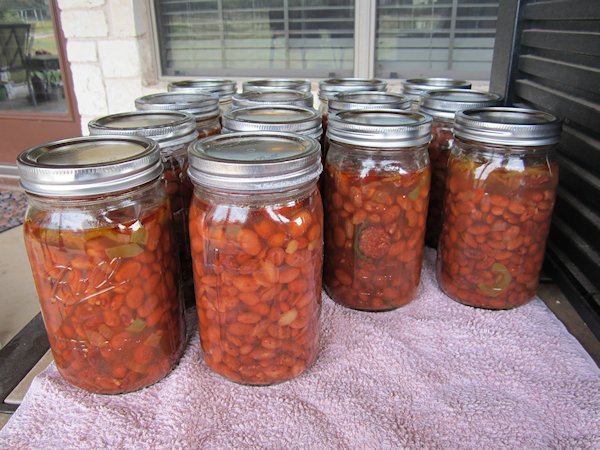 These are the first batch of red beans that were canned. There are 14 quarts, which is all I can fit in the canner. You can see how they plumped up and filled the jars. 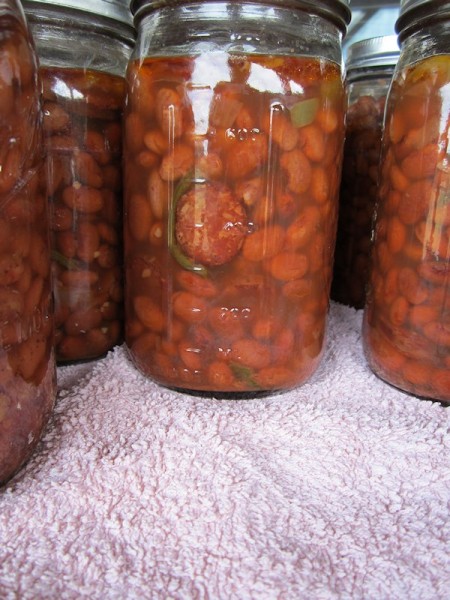 On a cold winter night, all we’ll need is a skillet of cornbread, a bowl of coleslaw, a pot of rice and we’ll have one fantastic meal. One of my favorites . . red beans or pinto beans, sausage, rice, coleslaw and cornbread.