Going out to the garden each morning always brings a smile to my face. We had a couple of weeks that it was HOT at daylight but we’re back to having temps in the low 60’s. It’s nice walking outside and it’s cooler out there than inside the house. Invigorating and again, I’m counting down the days til we’re out of the 100º temps.

Even though my grandparents had a big garden and I spent plenty of time around their home, and my dad always had a garden of some sort, I never realized it . . or maybe we didn’t do it . . but these days, we eat whatever is fresh. We put a lot of it up for winter but when we had potatoes in the garden, we had potatoes for breakfast, potatoes for lunch, potatoes for dinner . . they were so good, we never got tired of potatoes. When asparagus was plentiful, we had it for dinner about every other night.

This time of year, we’re having tomatoes with everything but there’s so much I can do with tomatoes, we don’t get tired of them. I cook with them – sauces, okra & tomatoes, salads, sliced on tomatoes, etc. The tomatoes are slowing down. Instead of getting a 5 gallon bucket of tomatoes every other day, I’m now getting one of my little baskets half full every other day. 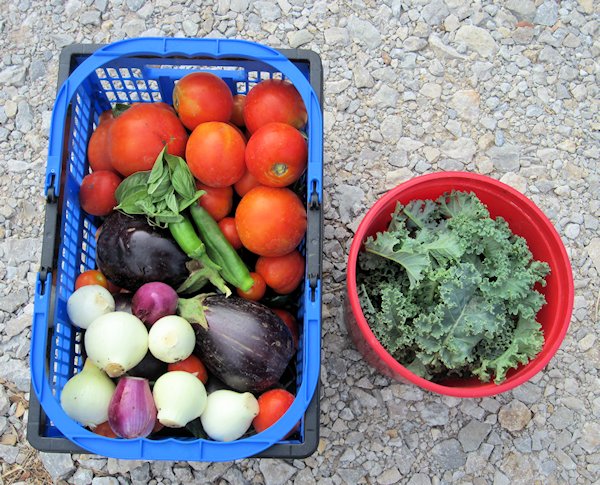 Veggies from the Garden

In the basket are onions, peppers, eggplant, basil and tomatoes. In the bucket, there’s okra in the bottom and kale on top. Last night we had okra. Tonight we’ll have eggplant and kale.

We can grow onions all year here but the ones I plant in early summer that I’m harvesting now never get as big as the onions I plant in the fall. The first part of October, I’ll plant more onions and our garlic crop for next year.

This year we’ve been so lucky with the grasshoppers. This time last year they had completely mowed down the asparagus stalks but this year, the stalks are still nice and green and I’m still getting a little asparagus. Last year, the grasshoppers also ate the onions and garlic even with the ground and this year, I find a few that have been munched on but not many. I’m thankful!

I love having a garden and I love that we hardly ever have to buy fresh veggies!