Lots of knitting projects in the works here and I realized I didn’t even take a picture of my Ashore progress but here are the ones I photographed this morning.

First is my Camp Loopy project, which is also my first Joji Knit Along project, and the pattern is On the Grass. I hope to get Grandpa done too but will not start it til I get a couple of the projects shown below finished. The yarn is Malabrigo Rios, which I love, but this one is giving me a hard time. You can see the big section of pink that appeared right at the end of the first skein of yarn. I had swatched off another skein and when I began knitting off the second skein, they matched perfectly so I breathed a sigh of relief thinking I wouldn’t have to alternate skeins but by the time I got down to that bottom of that first skein, I was getting pooling with pink. At first, I thought I’d leave it and let it pool but then decided I might ought to start alternating so I did, and ended up with a bit of striping so now I’ve added a third skein to the alternating and we’ll see what I end up with.  I love pooling and it doesn’t bother me even on a sweater but I was a bit nervous about how this one might end up. This one has to be finished by the end of August. 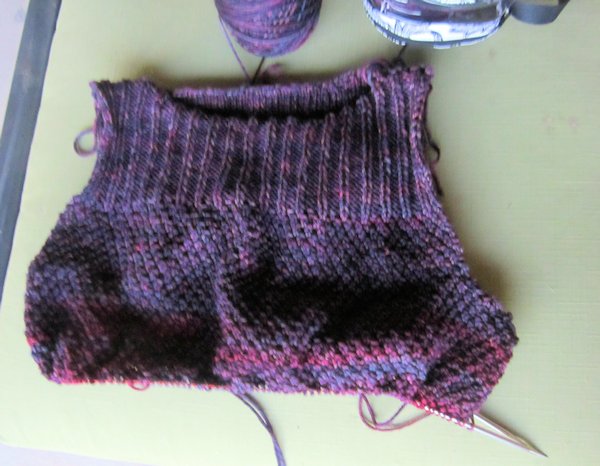 Project #2 on the needles is Honeylicious. The yarn is Dream in Color Classy (old formula). This is for Eat, Sleep, Knit’s third quarter KAL and it’s due the end of September. 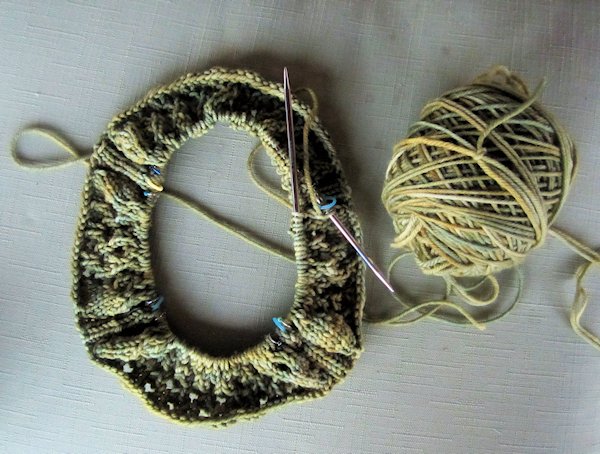 Project #3 is another test knit for Laura Aylor. It needs to be finished by September 3. It’s hard to tell from my progress but it’s a very basic, longer cardi with just above the elbow sleeves and really sleek pockets. This will be the perfect sweater for our area on those rare cool days. You can see .. I have LOTS of knitting to get done! 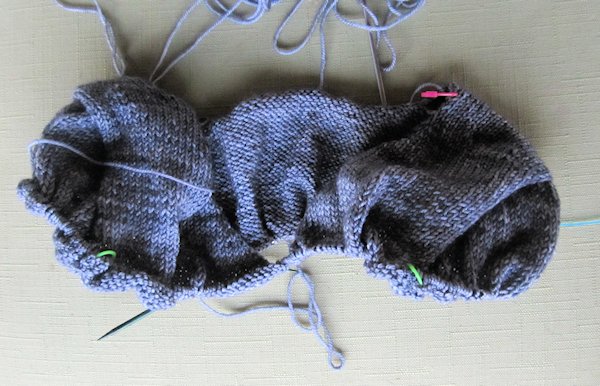