Last night I got the first sleeve finished. I absolutely love the Mrs. Crosby’s Steamer Trunk Worsted Weight yarn. I am not saying “YOU go out and buy it too” because I don’t know how it’s going to wear but it is probably my most favorite yarn ever to use. I know we all like different things . . some like soft and squishy. This isn’t soft and squishy. Some might even say it’s abrasive, though I think that’s a stretch but . . it’s very tightly twisted and I could be wrong, but if ever there’s a 100% Superwash Wool that’s going to hold up to wear and washing, I do believe this yarn could be it. For my swatch, once it was washed, it did get softer . . plenty soft enough that I wouldn’t have any complaints about wearing it next to my skin. I really like this yarn but you’re probably starting to get that idea, right?

No here’s Nicole’s Carabe with one sleeve done. 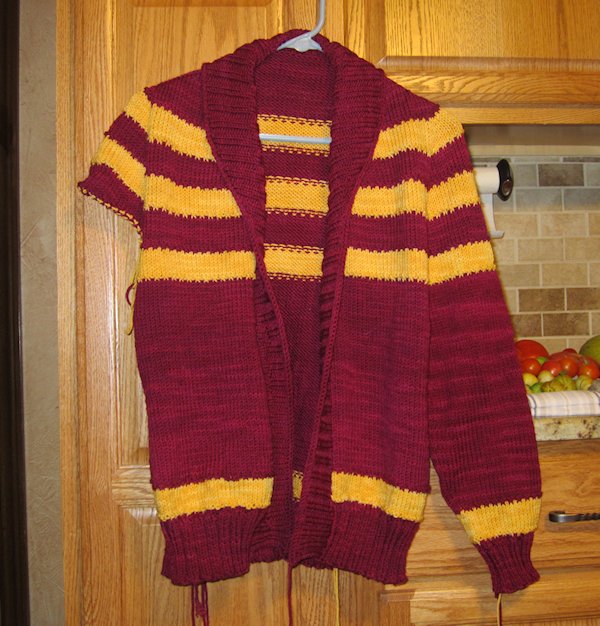 Someone had asked me the other day when I showed the picture if the stripes would get “smoother” after blocking. I’m assuming she meant because they look a little rough around the edges but these stripes have a Slip 1/Knit 1 when you change colors and right before that, there’s a purl row to make a bump row so they aren’t intended to be smooth . . if that’s what I was being asked. If not  . . ask again and I’ll try to give you a better answer.

I went ahead and steam blocked the stripe at the end of the sleeve so you could see it up close . . even in the horrible light in this house. 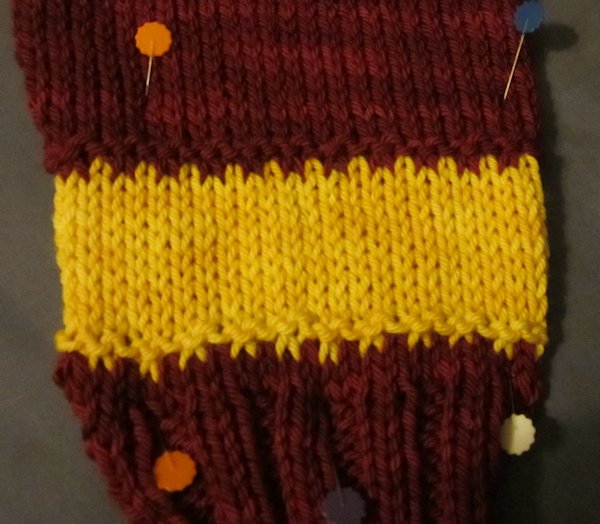 The colors used in this one are Hollywood Cerise and Golden Butter. For my sweater, I’m thinking about using these combinations (one . . not all!)

There are other colors and I’m sure The Loopy Ewe will be getting more in before I need to buy yarn (catch that . . need . to . buy. yarn!)  🙂

It’s really hard to make a 2 color sweater without it being someone’s school colors. My high school colors were orange and black. I have not ruled that out! Yes, I’ve always had this great taste in color!  🙂