The kidney stone news:  The plan was to fix the right side first because of the blockage but the left side is about to get the best of me. I called the doctor yesterday and he had me have a different scan (KUB) so he could assess the blockage on the right side and see if he thinks it’s ok to fix the left side first. Honestly, I’ll be surprised if I make it through the weekend without having to have something done on that left side. They have to do it one side first, let that side recover and then do the other side. They can’t do them both at the same time. I wish they could.

The lady doing the x-ray said “Honey, you don’t have a kidney stone in that left kidney . . you have a rock garden!”

Yesterday afternoon a friend had mercy on me and came over and helped put the tomatoes up. Ten quarts and I was amazed at how quickly it went with a helper. I resisted her help but I’m so glad she came. 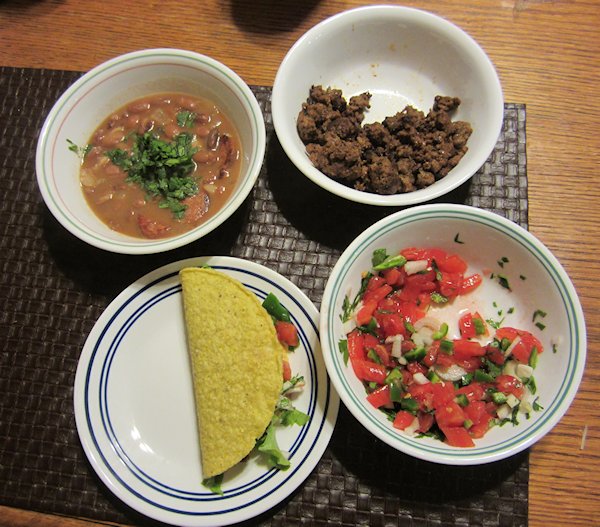 We had our antelope tacos and borracho beans last night, along with homemade pico from the garden. There’s plenty of taco meat, taco shells and everything else left over for lunches/dinner, along with 2 quarts of borracho beans. I think I’ll freeze one quart and keep one quart out.

Vince is building the last fenced area for the chickens so I’ll help him with that this morning. Hopefully I’ll get in a bit of knitting time but you can bet it will be a whole lot of sleeping going on. The pain pills are pretty effective with the pain but they knock me out.