I’m almost afraid to see what happens in the garden over the next week or so after all this rain? Besides mosquitoes . . I’m betting there’s going to be lots of stuff growing out there. I’m not complaining about the garden . . but I could be grumbling about the timing of kidney stones! 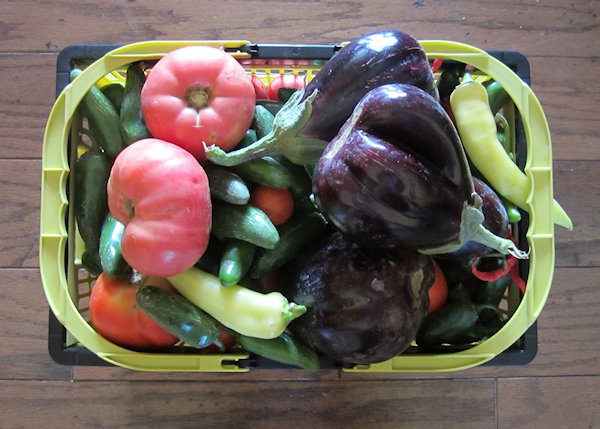 There’s a bit of squash in the bottom, quite a few tomatoes, a few eggplants and lots of peppers.

Last year I dehydrated a mix of banana peppers, bell peppers and pimento peppers, then put them through the blender. I called this “sweet pepper mix”. I did the same with jalapeno, poblano, tabasco, cayenne and chili peppers and called it “hot pepper mix”.

Yesterday while talking to Chad, he said “You know what I want you to make? More of that sweet pepper mix!” He said he had used a whole lot of that so I told him I’d get right on it. I love it when I make something and he enjoys it and wants more.

I had planned to get peppers in the dehydrator today but since it sits on the porch and since it’s so damp out there today, I’ll wait til tomorrow to get that going. From the looks of the blooms on the pepper plants, and now with the rain, we’re not going to run out of peppers.