How on earth can it already be time to choose Project 3? Time is seriously flying past me. The only good thing about that is . . hopefully cooler weather will be here soon but this summer heat is about to get the best of me. We’ve had worse summers – worse heat, worse grasshoppers . . so I shouldn’t complain but the drought . . oh, my! It is so terribly dry and we have no good chance of decent rain in our forecast. Summers are just brutal here and the one thing that will probably eventually cause us to leave here is the water situation. We both like gardening too much to live where water is in such short supply but . . time will tell. Maybe the drought will end before we throw in the towel.

Back to Camp Loopy . . I’m in serious danger of not getting my Project 2 finished. It was an ambitious guess to think I could get Carabe done in one month and then I didn’t start it til the 5th. I guess I’ve made good progress since I’ve only been working on it 5 days. 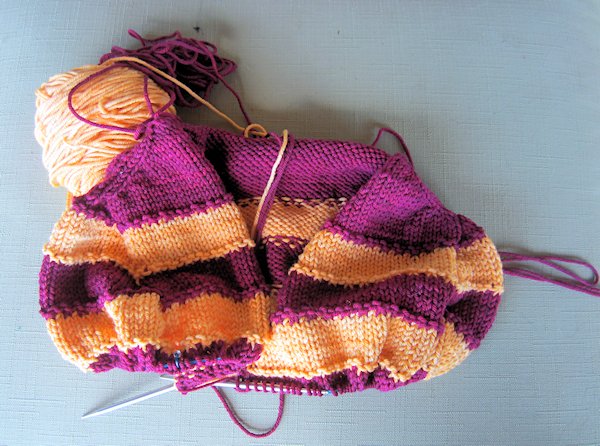 The colors are so off . . the burgundy is really more red and the gold is really more yellow.  My goal is to get all the way to the bottom and have it bound off by Sunday night. Fat chance!  Then get the button band and collar done by the 18th. Fatter change! Then have both sleeves done and buttons sewn on by the 29th. Slim to no chance!  🙂

But, I carry on. For the third project, I’m doing On the Grass. Joji (designer) is having a KAL where we can use any one of her patterns, so I’ll be meeting two goals with one project. I’m using Malabrigo Rios yarn in Purpuras. The challenge is to use at least 800 yards and use your favorite color. It was a toss up between purple and lime green but I used Rios in Lettuce for a project in last year’s Camp Loopy so . . I chose purple for this year.

Joji’s KAL begins August 1 and runs for three months.. I’m really wanting to do Grandpa too so I was thinking of trying to squeeze that in during the KAL but really . . I need to finish my friend’s Vitamin D, and get Addie’s Carabe made to match Nicole’s. If only we could have several days of rain . . the ground would get the drink it needs and I would have a good excuse to sit inside and knit!