I was out working in the garden . . nothing new and different there, huh?  My potatoes have pretty much died back and I need to dig the taters but with the leaves mostly shriveled up, I looked down and some of them had tomatoes growing on them. I kid you not!  I stood there for a minute thinking I was losing my mind. Am I thinking these are potato plants and I’m really on the tomato aisle? 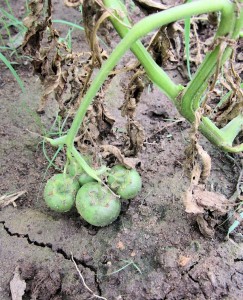 Vince was in the shop working so I went and got him . . come and see what I’ve found! 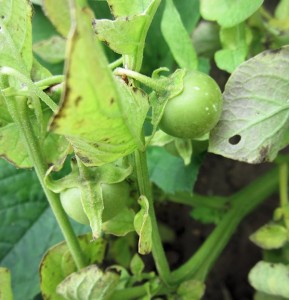 Vince has never been a gardener and he doesn’t know a strawberry vine from an okra plant and he was real sure that they were tomato plants and I just thought they were potato plants.  So I drug him over to the tomatoes and yes, they look a bit similar but I assured him .. these are potato plants!

Then I began digging! That would prove to him that there were potatoes and tomatoes on the same plant! 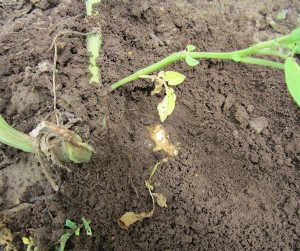 Yep, I see a potato down there! 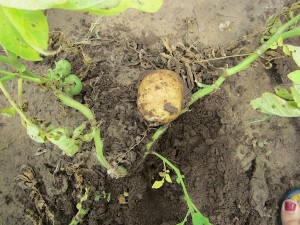 I dug up two big old potatoes before convincing him that it was a potato plant! Kinda hard to assure you that I’m wearing boots in the garden, isn’t it?  I see toes!  🙂 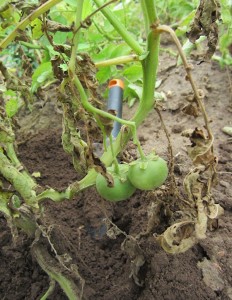 There you go!  See the tomatoes hanging right over where I just dug potatoes?

Complete baffled, I turned to Google. First I found this article from Purdue University. It states that potatoes do produce a fruit, and since potatoes and tomatoes are members of the nightshade family, the vines, as well as the fruit looks similar. According to the article, the potato fruit contains a high amount of solanine, which is toxic to humans, so the fruit should not be eaten.  Oops!  🙁

They say that when mature, the seeds can be saved and potato plants can be grown from them, though it takes much longer than growing from seed potatoes so I think I’ll stick with seed potatoes.

What’s weird is that it seems farmers don’t often see the fruit but it only happens when there are a lot of cool days. You can bet that what they consider “cool days” in Indiana . . well, they just don’t happen here in Texas during potato growing season so I’m still perplexed about how I managed to get these things.

If you remember back to early spring, my potatoes were about knee high when we had a late freeze.  I covered half my potatoes with boxes but half were left uncovered (because I ran out of boxes).  Those that were covered suffered no damage. Those that were not covered all froze back but then re-sprouted and it’s those that froze back and re-sprouted that are producing the fruit. All the seed potatoes I planted were the same so it has to be something to do with them freezing back and getting started again.

This article, from the UK and I don’t know if these are available in the U.S. yet, talks about a TomTato plant. Of course, it’s some kind of hybrid plant and even if it is in the U.S., it probably isn’t at Tractor Supply, which is where I got my seed potatoes. Apparently it produces tomato type leaves and from all appearances above ground, it’s just like a tomato plant, but has potatoes growing underground.

What I have are obviously potatoes producing an inedible potato fruit but it is pretty interesting, since in all my years of gardening, I’ve never seen it before.