They aren’t really her babies but she thinks they are and they think they are so . . they are! You know how it is in life . . if you believe it, then it’s real!  🙂

Remember back in March when we made our daily trip to Tractor Supply and ended up with three more chickens, even though we hadn’t planned on getting more chickens? 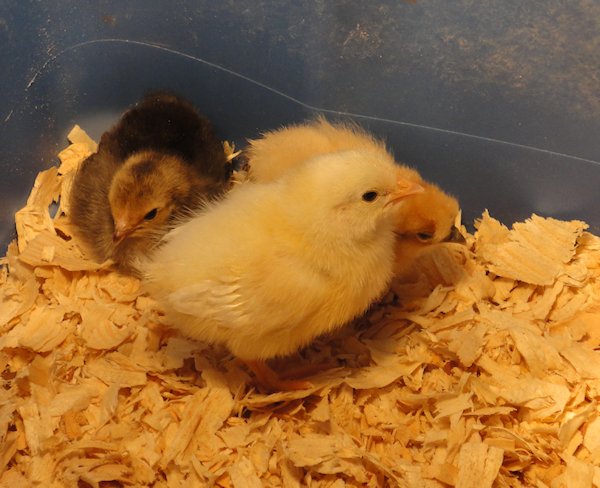 We couldn’t believe that someone had bought all the pullets and left ONE! So, we said “We’ll take her!” She was in the “assorted pullet” bucket and we had no idea what she would be but she ended up being a white leghorn. Pearl is the little yellow chicken in front.

There was the cutest, little shy chicken in the “assorted bantam” tub and I really liked her so we got her. She’s the brown one in the back. Her name is Belle.

And, there was one poor little Silky with pasty butt. We didn’t want any more Silkies but I found the girl at Tractor Supply and said “That chicken has pasty butt and you need to try to help her.” She explained that she had tried to help her (though I wonder) and if we wanted her, she would give her to us. I think she was saying “OK, Smarty Pants . . you want someone to fix her poopy butt . . YOU take her and YOU fix her!” So, we did.  Her name is Goldie.

Those three chickens have stuck together like glue. They are never more than a couple of inches apart. It’s so funny to watch them because even though they’re in with four other bantams now, and have been for about two months, the two groups are always separate. They all get along and they’re civil to each other but they keep their distance. Pearl and her babies sleep upstairs in the chicken condo while the other Silkies sleep downstairs on the roost. 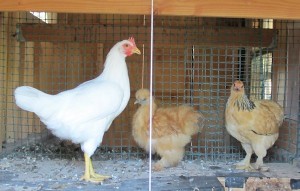 Pearl is a full size chicken while the other two are bantams. Bell (on the right) is a Buff Brahma. We had planned to put Pearl with the other full sized chickens, since all the ones in this coop are bantams, but we decided they’re all so close, we’re not going to separate them.

This is how they sleep at night: 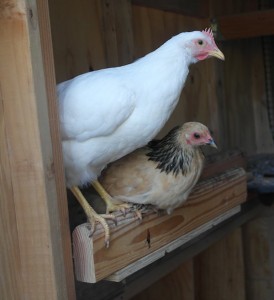 Pearl and Belle sleep on the roost, while Goldie sleeps right behind them. Not sure I’d want to be sleeping there . . chickens don’t have the best bathroom manners, but they’re happy with the sleeping arrangements so who am I to try to change things?