There are many different ways to cook rice and so long as you’re happy with your method, then  you’re using the right method. Rice is such a staple in southwest Louisiana, about the only way we didn’t eat it was in rice pudding. We ate it with beans, gravy, casseroles, fried, in boudin . . and there aren’t many meals in most homes where rice isn’t served.

Through the years I’ve tried a handful of electric rice cookers and was never pleased with them. This Zojirushi is perfect, as far as an electric rice cooker goes. I’ve been using it for over five years and I use it often. Here’s a blog post that I did about several new things I had purchased back in 2009. I use the rice cooker for brown rice . . any rice except plain white rice and sometimes I will use it for white rice if I need to cook the rice and have it ready and warm for several hours. The Zoji rice cooker is expensive but it’s been worth every dime I paid for it. We also put steel cut oats in it, and set it to be ready when we wake up in the mornings.

For plain white rice, my favorite method is to cook it on the stove. Most folks who cook rice on the stove have their favorite pot to use. My favorite pots are a set of very inexpensive Farberware pots that I bought when we had a second home and I didn’t plan to do much cooking there. This set was purchased in about 2002, became my favorites and they’re still my favorite. My Calphalon Professional pots are packed away and I use these Farberware pots every day. It’s one of these pots that’s my favorite rice cooking pot.

The pot used to cook rice needs to be thick, large enough that the rice will not boil over, and have a fairly tight fitting lid. For 1 – 2 cups of raw rice, I use the medium to large saucepan. 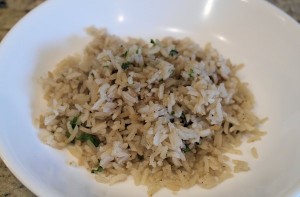 Here’s how I cook rice and I guess what intrigues people is that I use equal parts water and rice. I don’t even know where I learned to cook rice using this method but it produces rice that is light and fluffy and the grains are completely separate from each other. I do not like gummy rice! 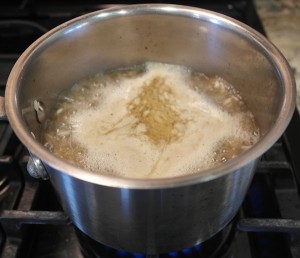 Your rice should be light and fluffy and perfect!