In this post, I mentioned dehydrating potatoes last year and that we hadn’t used many of them yet due to having a second/late crop of potatoes, and the diet but the potatoes in the garden are blooming and it won’t be long til we have a new crop. In my opinion, potatoes take a little work or they taste like they came out of boxed dinner . . and that closely resembles a cardboard flavor! Since there are quite a few bags/jars of dehydrated potatoes, and since I am determined to produce enough potatoes to make it through the year, except for the occasional baked potato that I will buy, and since the new crop of potatoes will be ready soon and I don’t want to dehydrate more of them if we’re not going to like them, I have worked to get dehydrated potatoes rehydrated and cooked into something we will eat. 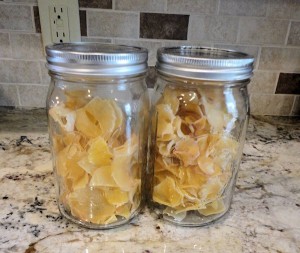 I started with the dried potato slices. Because we were having smoked brisket and it was a 15 pound brisket, even though some of it went into the freezer, I new we would be having brisket for several days, and probably again for dinner tomorrow night, so I used two jars of potatoes but one jar would have been enough for at least two meals for the two of us. 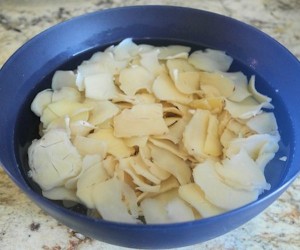 The potatoes from both jars were transferred to a large bowl and boiling water was poured over them. I did not boil the potatoes but simply poured the water over them, then put a plate over the jar and let them sit for about an hour.

You might notice the potatoes were quite yellow in the jars but once rehydrated, they’re back to being nice and white. 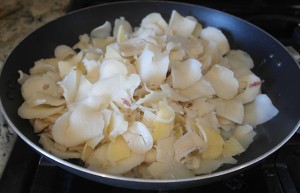 A little (or a lot) butter was added to a skillet and the potatoes were lightly browned. 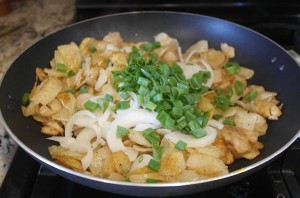 Once the potatoes were lightly browned, they were seasoned — whatever you like — I used Lawry’s Seasoned Salt, black pepper, and jalapeno powder. Then onions from the garden, bottoms and tops, were added. 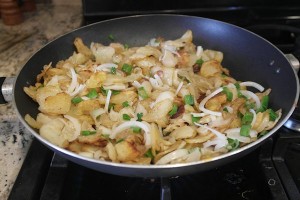 Dried potatoes are so easy to keep, even though they take a little while to get from the garden to the jars since my favorite method is boiling them til tender, cooling overnight, then slicing and dehydrating, but definitely worth the effort in order to have home grown potatoes all year.

The potatoes can be chopped, granted or sliced before dehydrating. We have had success with the dried hash browns . . I can’t tell the difference in them and fresh grated potatoes.

We’re real happy with our rehydrated potatoes and I’m hoping for another good crop of potatoes this year.