This month’s challenge should be fairly easy so I hope we’re all doing good. I meant to tell you yesterday and forgot — When Chad was living at home and loving to cook, he never used a recipe. He just made up things and I was always in awe of the things he would put together. Sometimes, they were just awful but most of the time, they were delicious. He loves garlic and he might saute apples and add garlic. No . . Chad . . don’t do that! For the longest time, if a recipe called for something and I didn’t have it, that was a big roadblock. I couldn’t improvise, but watching Chad cook taught me to make it work . . somehow.

The other day when I was cooking the roast beef, which we had as leftovers last night, I didn’t want it to be my standard roast beef. I was looking in the cabinet and had a can of tomatoes with Hatch chili peppers . . kinda like Rotel but with Hatch peppers. I added that to the roast and it give it just enough of a different flavor to be really good. I’m trying to learn to use what I have in different ways to change things a bit.

This morning for breakfast was another oatmeal day. I had refrigerator oatmeal (and there’s enough left for tomorrow so I’ll have it again and then we’ll move on to something else) but I added a chopped apple and cinnamon to it this morning.

For lunch we had leftover brisket, the beans I showed earlier, and a pear. 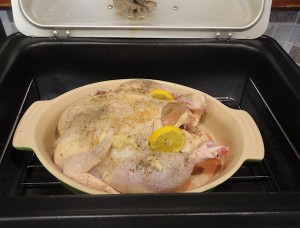 The chicken was seasoned and fresh rosemary was added last night. This afternoon I added a sliced onion and lemon to the cavity and under the skin. It was roasted in the Nesco roaster so as not to heat up the house, and to use electricity (solar) instead of propane for the oven. 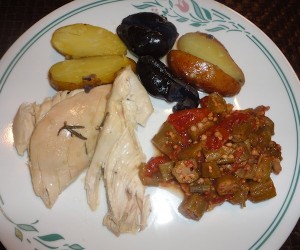