Here’s the final report on my first batch of hatching eggs:

Incubator #1:  This was the incubator that I sent back and replaced with the HovaBator, which I love. We added the automatic egg turner.

Incubator #2: This is the Little Giant incubator I bought from Tractor Supply.  It’s this incubator,and I’m happy enough with it that I’m going to keep it. The one from Amazon has an external thermometer/hygrometer, but with a line attached to the inside. Mine does not have that and I wish it did. I’m going to show it to Vince and see if he can do that for me.

In this incubator were 10 Australorp eggs, 2 Easter Egger eggs, 3 Bielefelder eggs, 1 egg from my Dominique chickens and 17 turkey eggs.

Of the chicken eggs, only my Dominique egg hatched. Of the turkey eggs, 7 eggs hatched (including 1 yesterday and 1 this morning). One of those turkeys died. The last two hatched on Sunday. Last night I candled the remaining eggs, none of them looked like they had a potential to hatch so I threw them out.

Incubator #3: This is the little Brinsea Mini Advanced incubator.

I had high hopes for this incubator and used it for a test, of sorts. It holds 7 eggs so I put 3 Australorp, 3 Bielefelder and 1 of my Dominique eggs. Nothing hatched! When candled, only the Dominique showed that it was developing so I think the eggs either weren’t fertile or were damaged in shipping, or a combination of both. The Dominique egg stopped developing at some point. I can’t say it’s the fault of the incubator since I had such terrible hatch rates from the other eggs, and with 2 of my 3 Dominique eggs hatching, that’s a good rate so 1 out of 3 not hatching isn’t something I can say was bad.

So, the final numbers are:

Chicken eggs: Out of 50 mail order eggs, 5 hatched. Out of 3 eggs from my own chickens, 2 hatched.
Turkey eggs: Out of 17 eggs, 7 hatched, and I believe I would have had a better hatch if I had known exactly when they were all laid. You are supposed to stop turning the eggs 3 days before they hatch because the baby is positioning itself for the escape but I didn’t know when that 3 day period began so I had to guess and I’m afraid there were some that would have hatched but I kept getting their position messed up. I feel bad but if I had not turned them, they could have grown attached to the shell and that would have caused problems too.

I’m disappointed and probably should have used just a dozen eggs in my second attempt but, as you can see, the two bigger incubators have been cleaned and loaded again. These were the photos taken while the turkey eggs were still in there but they’re gone now. 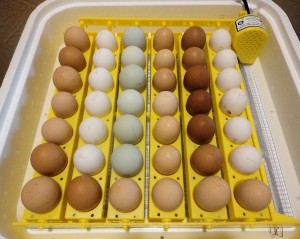 Since these eggs were not mail ordered, I’m hoping to have a much better hatch. 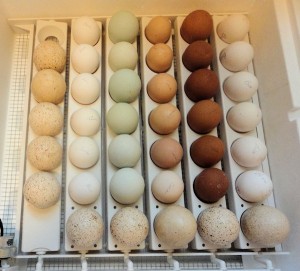 I so hope we get a good hatch out of these.

The little turkeys seem to have so much more personality than do the chickens. They’re inquisitive. They want to see what we’re doing and they “chatter” and have different tones and different sounds. I could see myself getting real attached to a couple of them. I wish there weren’t so many mean critters out here trying to eat the animals I want to raise. Between the snakes, the hawks, the coyotes and whatever else is out there, it makes it real hard to get attached to anything because I’m so afraid I’m going to go out there one day and find a repeat of what happened with the dogs/chickens or the animal that got Roscoe when he was sleeping in the tree top.

Life in the country can be real hard . . but it’s the only place I want to be. Green Acres is the place to be.