The venison jerky is made. By the time Vince trimmed up all the meat, I ground the meat and weighed it and bagged it up,  Saturday was pretty much gone and it was too late to start the dehydrating so we stuck it all in the fridge and got started on seasoning and extruding the jerky this morning. 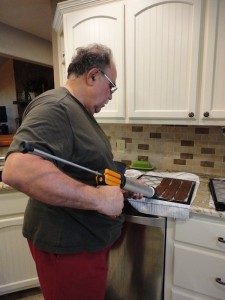 And a little dog is always right under our feet when there’s food involved!  You never know with someone might drop a little morsel. 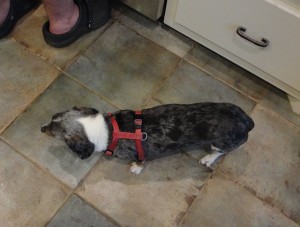 Last year Vince bought the Weston Original Jerky Gun and this was the first time he used it and he was impressed. It was easy to use, easy to clean and the jerky made from ground meat was delicious and easier to eat than traditional sliced meat jerky. 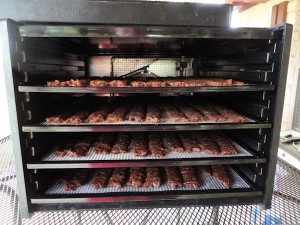 By the time he was done, we had used all but two of the shelves in the dehydrator. I love the Excalibur Dehydrator and I think I’m going to go ahead and order a second one because in the summer, I need two of them running. I kept thinking I wasn’t going to order a second one because at least nine months out of the year, it sits on the shelf but last year, I dehydrated so many tomatoes for making tomato powder to add to gravy and soup; I dehydrated a ton of jalapeno peppers for jalapeno powder. I dehydrated okra that we’ve used for snacking and for soups. I’ve dehydrated onions and probably this week will dehydrate a bunch of chopped green onions. We looked at the Cabela’s dehydrator online today but I think we’re going to go with the Excalibur again. 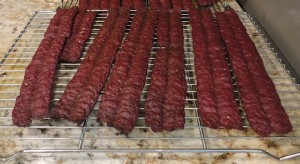 We made four different flavors of jerky and I think we liked the hot & spicy one the best. From 10 pounds of meat, we ended up with between 4 and 5 pounds of jerky. There’s still a good bit of venison in the freezer so very soon, we’ll be making more jerky using this method.