The number of chickens we have around here is really beginning to be a touchy subject. I have not told Vince yet how many eggs are coming. Maybe at this point I should start hoping they get lost in the mail! I’m trying to be very diplomatic and say just the right words . . it’s always easier if I convince him that what I’m thinking about doing is a good idea, and then he’ll agree, and then I can do it and he doesn’t have to know I did it before he agreed to me doing it.  Good grief . . we’re just talking about chickens . . nothing illegal or that involves going into debt or anything like that!

Me:  I know  you don’t want to build another chicken coop but I have an idea and it doesn’t have to be fancy and I don’t want to pay the builders to build it (like we did the other two).  I know you and I could do it together.
Vince: I am NOT building another chicken coop!  At some point,  YOU have to realize that we have to stop getting chickens! There’s a limit to everything!
Me:  Maybe if I got some really interesting chickens, I could sell the eggs to folks who want to hatch their own! Maybe if I made a “business” out of it, we could write off some of the expenses! (See . . now I’m talking his language!)
Vince: I guess the coop wouldn’t have to be off the ground and quite so secure if we built it inside the high fence.
Me: Yes!  That’s what I was thinking!  I did order a few eggs! (Just snuck that right in there!  I don’t think he even heard but I said it!)
Vince:  Call Tractor Supply!
Me:  Why?
Vince:  It’s Tuesday . . the should have had a shipment of chicks this morning. See if they got any cochin bantams!
Me:  I ordered eggs!!
Vince: That little cochin bantam is so cute!  Let’s go see if they got any in today.

Yep . . they did!  They now have 6 less and we have 6 more chickens. I had no intention of going there today so this is all Vince’s fault. 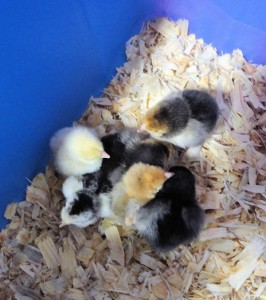 They are so cute with their feathery little legs. 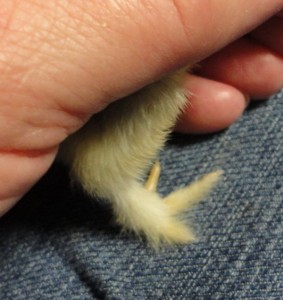 Come to think of it .. that’s about how my legs look at the end of winter! 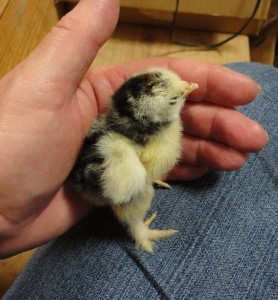 This one is my favorite. Her name is Dolly. I hope it’s a she! Now we have 7 cochin bantams. I’m hoping there are no more than 2 roosters and I’d be thrilled if there was only 1 but that hasn’t been my luck in the past.