Have you ever heard Ray Stevens’ song about the squirrel in the church? That’s how I felt yesterday.

The 13 little chickens were all standing on the ramp, looking inside the coop . . like “we need help”. I ignored them for a while but then decided to go see what was going on. I opened the coop door and there was a squirrel in there eating the chickens’ food. Almost at the exact minute I saw him, he made a flying leap out the door . . the door I had just opened and was standing in front of! We jumped so close past my head that I felt the breeze from him passing by. Thank goodness there was no one within hearing distance because I screamed and it might have included a word that a lady should not be saying, and thank goodness . . I did not have to go to the bathroom at that instant! 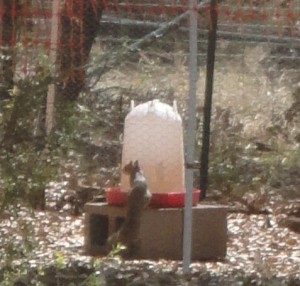 A few minutes later, I was in the house and looked out and there he was at the watering container inside the chickens’ run area. 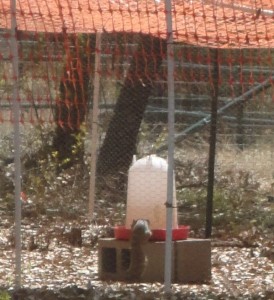 I took the photos from the porch and didn’t try to get up close to him til I’d already gotten the pictures I wanted but once he saw me, he went straight through the netting at the top. It’s obvious he does this often. I’ll start filling a water container outside the fence and see if he will drink out there and stay out of the chickens’ water. I don’t know what kind of diseases squirrels may have and I don’t want them passing anything along to the chickens.

Considering how much wildlife we see around here, we don’t see a lot of squirrels and I’d be real happy if this one doesn’t scare the heck out of me again.