My husband is the most amazing shopper. Sometimes I just don’t believe the deals he gets.

When we left Kentucky, not everything would fit on the moving van. Despite the movers blaming it on the amount of batting I had, I’m not taking credit for having to leave behind a generator and garden tiller, along with quite a bit of other “worthless stuff”. We knew we were moving to town in MO and didn’t figure we would have a garden so we didn’t worry about the tiller. Then we bought the lot behind our house and had room for a garden.

But, when we had the garden in MO, we had to buy a tiller so Vince bought whatever he could find there locally and it was a front tine tiller. It was fine for the size garden/type dirt we had there. Fast forward .. we’re in Texas. The ground here has never been tilled, I have to soak it for several days just to get it tillable, though it’s good dirt, and it’s a much bigger plot. Vince really needed a rear tine tiller with reversible tines.  If we did the whole garden at one time, he could use the tractor but since I garden year round here, it seems like there’s always a couple of rows here and a couple of rows here, or a corner here or there that needs to be tilled and we never have to break up the whole garden at once.

We’ve talked about getting a new tiller but just haven’t taken the time to do it.

Thursday, we were out running errands and I wanted to run by Home Depot and look for more artichoke seeds. They didn’t have any but Vince came up to me and said “We have to go home and get the truck!” Huh? What are you buying? He told me that he was getting a tiller.

Our poor truck so rarely gets driven. Even though I want a newer, bigger pickup, we use it so little that it’s not worth it right now . . maybe once the Honda is gone but do Hondas ever really wear out? Here’s proof how long the truck’s been sitting.

Anyway .. we climbed into the dirty truck and went back to Home Depot to get the new tiller. 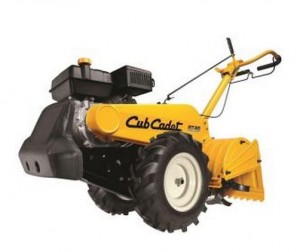 Here’s the deal he got! This tiller was regular $799. Someone had ordered it online, never used it and returned it to the store. It was priced at $400. Can you believe that? Vince had the guy hold it for him while we ran home to get the truck. The guy told Vince that three people came in and would have bought that tiller in the 45 minutes or so that it took us to go home and get the pickup.

So . . we have a new tiller and hopefully this weekend, Vince will have time to try it out.