My first experience with Stephanie O’Dea was through her blog, A Year of Slow Cooking.

She has now written at least three slow cooker cookbooks. Nicole and I both have the first one, 365 Slow Cooker Suppers. 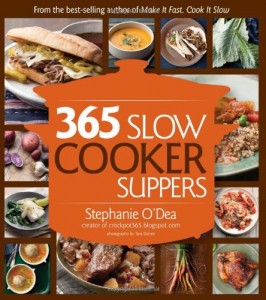 Two nights this week, I’ve made dinner out of the 365 Slow Cooker Suppers book and both times, Vince has raved about dinner.  Nicole first made the BLT Chicken and told me it was great so I made that and yes, it was great! Last night, I made Pork and Black Bean Lettuce Wraps, but actually served it on a bed of lettuce instead of as a wrap. 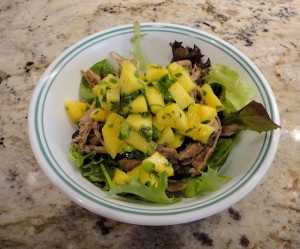 I didn’t have a mango but had a pineapple so I was going to use that but then we ended up going by the store for something else so I got a mango.  This was one of the best dishes we’ve had in a very long time! Vince kept saying “We couldn’t get anything like this in a restaurant around here!” It was really, really good. We have steak out to grill tonight and I’m thinking I might would rather have leftovers from last night!

The black beans I used were the HEB brand with jalapeno peppers and I think that made this even better. If I were using any other kind of black beans, I might add jalapenos to the meat/bean mixture while cooking it.

One thing I have a hard time with, especially using the crock pot, is stringy meat. A blog reader once suggested this and it is working . .  I cook my dinners way less than the time given, or at least on the lower end of the amount of time given, and I’ve been having better results.