For many  years, probably since the ice storm that hit southwest Louisiana in 1997, I’ve been working towards being more prepared. It was January and we had not been having extremely cold temperatures but one night, the temps dipped to about 27º and it began to rain. Since that area never had much of an ice issue, limbs over power lines were not trimmed and it amounted to “the perfect storm”. In just a few hours of those below freezing temps, limbs came down and most of the Lake Charles area was without power from 5 – 7 days. There were no fast food restaurants open, within just a few hours, grocery stores were completely empty and without power, they were not restocked. Chad was 9 at the time and we ended up going to my parents where they had a fireplace and we were able to stay relatively comfortable and fed. But, it was a lesson I will never forget.

My prepping skills have improved through the years. One thing I remember is that as a kid growing up and as a young adult, living in hurricane zones, we always bought hurricane supplies and they always included things that you MIGHT eat if you were starving but otherwise, they went in the trash! I no longer buy anything for my long term supply pantry that we won’t eat on a daily basis. We eat and replenish everything in our cabinets. We do have some supplies that are specifically for emergencies but we know that’s all good food and things we actually will enjoy eating.

Vince has never truly been 100% pleased with my prepping efforts.  He will go along with my crazy ideas to some degree. Most of the time, if I can convince him that my ideas are really, really good ideas, he will agree but always with a little hesitation. When I wanted the solar oven, I was able to explain to him that I could use it for baking without heating up the kitchen or using propane. He was fine with that and now that he sees how much I use it, he’s often the one showing it to friends. There are items/things I’ve purchased that he’s not totally sold on but when/if we need them, he’s going to be happy I have them.

It was probably ten years ago when I began talking about wanting solar panels and Vince flatly refused to even discuss it with me. Back then, we were living in Kentucky, and then in Missouri, neither of which have great “sun hours” for producing solar power.  All these years, the thought has been running through my head to come up with a way to live off grid. Though we’re not going off grid, and probably never will unless there are some great technological advances in the systems, Vince has decided that it’s time to install the solar panels and come up with a backup source of power for the house.

That was such a big step . . him coming around to at least seeing the need for it. Today I saw that Vince has shared this on his Facebook page. 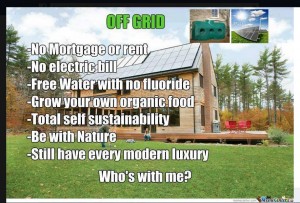 Do you know how happy it makes me to see this on his page? It’s one thing for him to begrudgingly agree to my crazy ideas but it’s totally another thing when he’s fully onboard and seeing things the way I see them and we’re both working together instead of me trying to figure out how I can present my argument in a convincing manner. We don’t always agree 100% on everything but for the most part, we do think alike in so many ways and that makes life so easy and enjoyable!