Chad and Nicole have this little chopper: 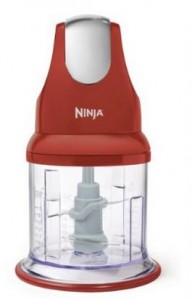 I love it!  I have several choppers/food processors/blenders but this little thing did a better job for so many things and it is so easy to clean! I wanted one and my nature is . . I want it NOW!

Amazon has them but they’re about $29 there and $19 at Wal-Mart. Chad’s Wal-Mart didn’t have one . . they were sold out. My local Wal-Mart was sold out but the Wal-Mart where I was staying last night had them . . according to Wal-Mart’s website so when I arrived in town, that was my first stop and I now have one.

Besides being so easy to clean, it’s little and I can stick it in one of my deep kitchen drawers and not have to leave it sitting on the countertop.

There were all kinds of models . . some do more, but this basic model will do just fine in my kitchen. I can’t wait to cook in my own kitchen and use it!