Saturday night, by the time we went to bed, all the chickens were where they needed to be.

Everything was perfect . . til we woke up Sunday morning. The temps had dropped. Everything had frozen!  From 85 degrees to about 22 degrees in 6 hours. What a mess.  Water hoses had been left on faucets, watering cans had been let outside. I knew it was going to be cold Sunday night but had no idea the temps were going to drop so early.

We had planned to a heat lamp on the 6 bantams but the way that coop is situated, we couldn’t keep the chickens dry in a blowing rain and we had some blowing rain coming.

We had to get them, and move them inside the shop into the tub that the 13 other chickens had been in. 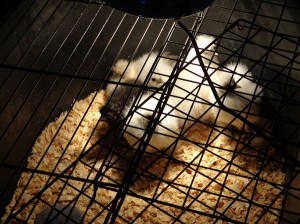 They have plenty of room to stay in there for a couple of days.

The 3 new babies still need to be kept at 90 degrees.  We cannot do that, even with the heat lamp, in the unheated shop when the temps drop down below 20 and it was going to get down to 16 so they go moved into the bathroom in the house. 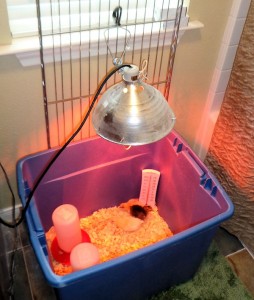 I think the chick with pasty butt is going to be fine. I’m hoping that we can put these in with the other chicks in the big coop. Pasty Butt is another Silky so I may try to add that one to the other Silkies but that will give me 11 chickens in that coop and it’s a much smaller coop. I don’t know if that one is a boy or girl and I don’t know if the cochin is a boy or a girl. The third one is supposed to be a full size hen .. probably a white leghorn.