Since the red hens were out of the big coop, and since the 13 little hens that had been living in the tub had outgrown the tub, we moved them to the big coop. 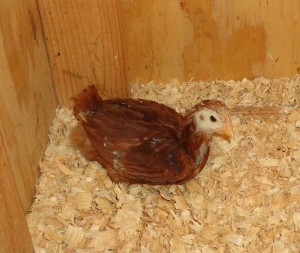 I think this little lady has my personality . . she just wanted some space and some time to herself without anyone around her. She found a quiet spot in one of the nesting boxes and sat there for the longest time. 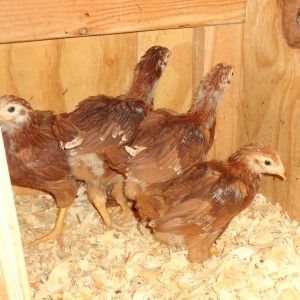 These huddled together . . a bit apprehensive about their new surroundings. 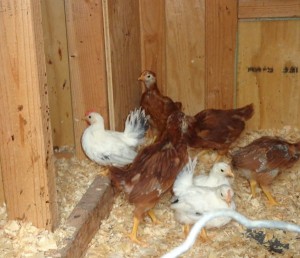 These little girls and boys are checking out all their new space!

As we were making decisions about which chickens would go where, I was feeling bad about moving the remaining red hens out of the big coop. I told Vince they had survived the dog attack and now I feel like they were being punished by being put in the smaller coop. He wasn’t very sympathetic but then I was thinking . . it’s kinda like adults.  We have bigger houses and raise our families and then our kids grow up and leave and many of us move into smaller houses. And then sometimes, the kids stick us in the old folks home and never come to see us! When Chad was a teen and we were not doing so well together, I don’t remember what we were talking about and he said “When you get old, I’m going to find some roach infested old folks home and stick you in there!” I hope he’s forgotten about that plan.

There’s a heat lamp in this coop so these chicks are fine. We’re keeping them inside for probably another week and then they should be big enough that they can’t escape through the fence.

Notice “Little Roscoes” in the picture. I do believe there are 2 roosters.  One of my newest chicks is supposed to be a hen so with 11 full size hens, 1 bantam hen and  2 bantam roosters, it may be a combo that works. We’ll have to see. If not, one of the roosters will have to go.