Saturday was so beautiful here. It was warm  .  . 85 degrees, and sunny.  We both spent the entire day dealing with chickens.  You can’t just take two batches of chickens and combine them.  It’s that pecking order thing. We had:

That means, our coops were all occupied but . . we have 13 new chickens and 3 baby chickens that all need homes.

Vince said “I am NOT building another coop!” That’s a bad attitude if you ask me!  🙂  The problem is that each coop has food and water inside, and water outside in the run so with three coops, every day we have 6 watering cans to clean and fill and 3 food containers to keep filled. When it’s cold, we have to have 3 heat lamps running. Adding a 4th coop would create a whole lot more work for both of us so we needed to find a way to combine some chickens.

We did have this little coop .. which is kinda worthless, but we bought it at Tractor Supply when the mama Silkies kept hatching eggs and the babies were escaping from their runs.

The easiest way to integrate two sets of chickens is to put them right next to each other where they are eyeball to eyeball for a while, but there’s a fence between them. 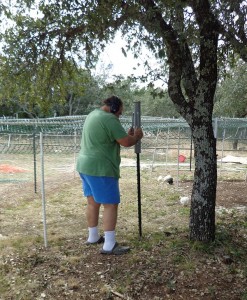 I then we should buy stock in the company that makes these T-posts . . we use so many of them.

Vince took the little coop and build a solid wood front, with an opening and a walkway and then built a fence around it so that the fence connects to the fence around the bantam side of the duplex. 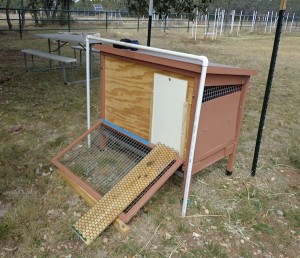 We decided that we would put the 6 young bantams in this coop, move the 4 red hens into the bantam coop and then once they get to be friends, we’ll put the bantams in with the 4 red hens and that will give us 10 hens . . 4 full size and 6 mini chickens, on that side of the duplex. 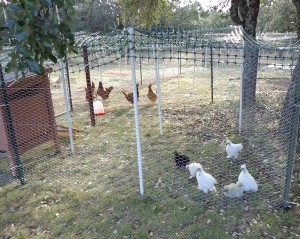 Catching the bantams to put them into their new space wasn’t so hard. Catching those red hens was a chore! Both of us were in the run and at one point, I had to crawl into the coop to get one of them.

Everything was fine. They seemed happy  . . til bed time. Neither batch of them would go into the coop. The bantams kept standing in the corner, looking at their old coop, and trying to figure out how to get inside but they could not get into that cop and they would not go into the new coop so I had to go back inside the pen, catch them all and put them into the new coop.

Both of us had already had showers and Vince said “I’m not taking another shower!” so I said . . well, one of us has to catch them . . so I went in and caught the red chickens. They were fired up and did not want to be caught so I ended up taking a piece of plastic fencing and throwing it over them like a net and capturing them that way. 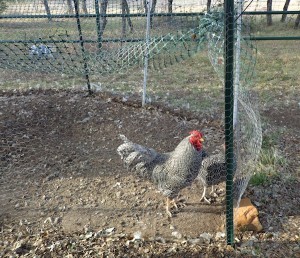 All the while, Wilbur was in the pen next door being very vocal about his displeasure with his new neighbors. That rooster is huge! I had a friend over the other day and she looked at him and said “How did he get so big?” I think he’s about the size of a small turkey! Even though there’s only him and 2 hens on that side of the duplex, I can’t put any other chickens in there because they’re all way smaller than the Dominique hens and he would be brutal.