We ordered 13 baby chicks a while back and they’re now ready to go into the outside coop. We’ve had to get a bit creative to make room for them all but they should get moved into the big coop this week.

Last week Vince and I went to vote early and as we were leaving, Vince said “Tractor Supply has baby chicks!” NO!!!  We don’t need any more. We made a deal with each other that we would go look but we were NOT going to buy any.

We got to Tractor Supply and they hardly had any left. Those first few batches of chickens go quickly. There were a few bantams, some cochin and some silkies. There was one little grayish brown bantam that was so cute. It seemed to have a good personality and I kept watching it and giggling. There was one little yellow one with “pasty butt”. I pointed it out to the girl working with the chickens and she said she had been trying to clean the baby chick’s “vent”. OK . . all little too much information but that’s really info you need to know!  🙂

Then when I looked over in the “assorted pullet” tub, there was ONE little  yellow chick left. Someone had bought the last of the chicks and left ONE!  One is a lonely number, you know?  I was sad that the little chicken was left alone.

Tractor Supply has a rule that you have to buy at least 6 chicks and, there was no way we were getting 6 chicks but I would have taken that one lonely little yellow chick. The lady said  . . if you want it, you don’t have to buy 6 chicks. You can buy just the one. Vince said OK . . we’ll take it. Then he said he wanted to buy the little dark cochin bantam that I liked. The lady said “If you’ll take Pasty Butt and take care of here, I’ll give her to you.” 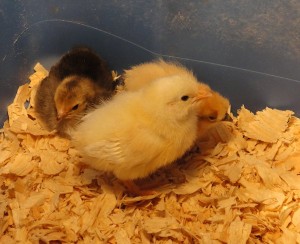 And that, my friends, is how we ended up with three more baby chicks!