Our little greenhouse that we put up is doing ok but we need something bigger and stronger. The Texas sun and wind are brutal so we’ve done a bit of research and decided on this greenhouse. 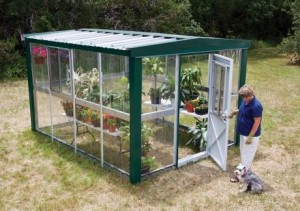 We’re getting it from Mueller’s out of Ballinger, Texas and it should be here by mid-march but then Vince and his buddies have to assemble it. Vince wants to put a concrete footing in so the building can be anchored, so the installation will not be a weekend project.

We decided on the 12′ x 18′, which is the biggest one they have.  It should give me room to have space for a little potting area, or maybe I could talk Vince into building me a little potting shed. I think the 12′ x 18′ has four windows and then double doors and both of them have windows in them. We’re going to put a couple of vents and a fan in it, and we’re getting another 250 gallon propane tank and heat the greenhouse with propane.  And, we’re praying propane prices come WAY down before we have to fill two 250 gallon and one 500 gallon tank.

I’m pretty excited about the greenhouse. At first we were thinking about the cost of the greenhouse and the savings of starting the seeds for our spring garden and the cost vs. benefit just wasn’t working. But then we thought about being able to have tomatoes all year, maybe a few peppers, artichokes . . I’ll even try growing eggplants in there. I would say we would have cucumbers all year but since I have never once in my life been able to grow a cucumber, I’m not overly optimistic about those cucumbers.

If nothing else, during the middle of winter when I’m just aching to get my fingers in the dirt, I can go out to the greenhouse, turn the heater up and play with plants.