Yesterday I knitted like crazy in the car.  While Vince was shopping in places where I had no interest, I sat in the car and knitted. One sleeve is finished and the other is started. 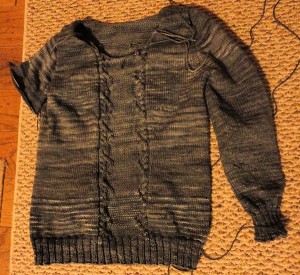 Laura Aylor has now released the pattern and it’s called Sleepy Hollow. I’ve captured the pattern page from Ravelry so you can see a better view of the front. 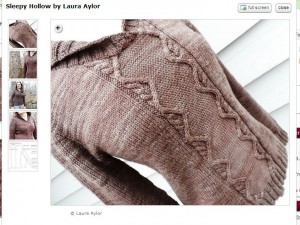 Right now, through March 2, Laura is having a promotion . . to celebrate the release of her 13th sweater pattern, buy Sleepy Hollow and get any one of her other sweater patterns for free!  How’s that for a great deal?  I’ve made Brier Island and Rhinecliff and love her patterns. I find her directions easy to understand and easy to follow . . and if you know me, you know I don’t do well with either of those things.

Sleepy Hollow has flattering waist shaping, which could easily be left out if you wanted more of a boxy type sweater. This sweater can be made just a tad larger than actually needed and a shirt or turtleneck worn underneath it.  Once you get going, except for the cables in the front, it’s lots of mindless knitting . . which I love!

My photo does not do justice to the gorgeous cabled panel in the front. 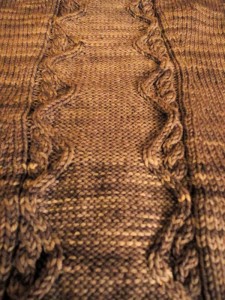 I love the feel of this yarn but had I known it was going to be so mottled, I probably would not have used it. I think I’m going to make another one of these in a more solid  yarn so the cables will show up better. This has been a fun knit for me!  You may remember that I had to start over from the beginning twice and neither time had anything to do with the pattern being hard.  The first time I made it, I knitted all the way down to the waist before trying it on. When I began knitting, I was one month into my new eating plan and had lost some weight but had no idea how quickly I was going to lose and the sweater was too big. Knowing I was going to lose more weight, I wanted to make it smaller! My gauge was off just a bit and I knew that but didn’t think it would make a whole lot of difference. It was supposed to be 20 stitches per 4″ on size 6 needles. I was getting just a tad over 20″ . . not even 21″, so I went with it. When I ripped back and started over, I went down one size in the pattern but also went down to size 5 needles which resulted in about 19-1/2 stitches per 4″. I probably should have gone down 2 sizes and stuck with the size 6 needles but I didn’t and I’m happy with my sweater. That would have made for less knitting lengthwise.

When I started again, I just went right to the from cable chart once I got going and totally forgot about the armscye increases so my sweater went straight from the edge of the shoulder down. It was only when I got to the point of splitting off for the shoulders that I realized I had left out a huge part of the top so I ripped back and started over again.