Vince and I went to San Angelo today . . to do a little shopping and eat at our favorite Mexican restaurant, Armenta’s.

You’ll thank me for not having a photo of this incident but we were driving along . . I was knitting the sleeves on my sweater, one of my knitting needles fell, went under the seat and I couldn’t find it just feeling around. I said to Vince “Don’t have a wreck!” and took my seatbelt off and climbed into the back seat . . which wasn’t so hard. I had to stretch out on the back seat and reach and feel around under the front passenger seat and found the needle.  I handed it to Vince so I wouldn’t poke a hole in the ceiling or in the seat as I climbed back into the front seat. Oh, my  . . getting into the back seat was a whole lot easier than getting back into the front seat. To make matters worse, I had on my boots and they don’t work nearly like flip flops when trying to bend the ankles and toes and wiggle through a tight spot.

It was like I was doing the splits . . not a pretty picture!  My front leg was in the front floor, I was halfway laying on my side and my left foot was stuck behind the driver’s seat. Vince was saying “What do you want me to do?” I was saying “Call the jaws of life . . I’m stuck!”  We were both laughing and I was thinking . . if I pee in my pants, you’re not going to think this is very funny at all. I finally thought to slide my seat all the way back. Vince was saying “Don’t hit the shift!”  Yes, putting the car in reverse going 75 miles per hour might not be a good thing. This didn’t go on nearly as long as you might think . . from reading this description, but I did manage to free myself and resume knitting.

Vince said “I’ve never seen anyone climb into the back seat of a moving vehicle for a knitting needle!”  Really?  He obviously has no idea the lengths to which I would go to be able to resume knitting.

The rest of the day went along smoothly.  No speeding tickets, no accidents, no credit card issues. When we do finally go shopping out of town, we have so much to buy that our credit card people usually have a coronary and call us about the 2nd or 3rd stop but today . . no calls from them.  I guess we didn’t shop enough!  🙂

Vince was the big shopper today.  I bought this Carhart camo coat for Addie for next  year. It’s a boy’s jacket but she needed a camo jacket since she’s going to be an outdoorsy type girl. It was regularly $69.99 and it was on sale in the store for $21. 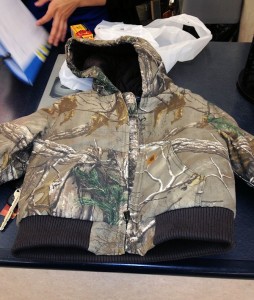 I also got a skein of bright gold yarn and some puffy paint (to put on the bottom so they’re not slippery) at Hobby Lobby to make Duck Socks for Addie. That’s it . . all I bought!  The good news is . . I don’t have much stuff to put away.  Vince will be busy the rest of the evening putting away all his stuff.  Good Judy.  Bad Vince.