Around our house, Vince and Chad have always told me that I had the game almost finished in my head before the ball was even thrown out because I’m always thinking ahead and planning for the “what ifs” that can happen. I’m really a “half empty” kind of girl but I learned years ago that when we plan ahead, we’re way less likely to panic and go into a frenzy when something goes wrong. Example: When there’s an ice or snow storm headed our way, while other folks are running to the grocery store and waiting in line to fill up their vehicles with gas, my tank is full, my pantry is full and I don’t even worry about it.

Vince goes along with all my prepping efforts but he’s never been the leader when it comes to preparedness. I’ve begged, literally, for us to live off grid and his canned response is that it costs more to do it than the payback. He kept telling me that it takes 20 years to recoup the investment and since, historically, we have not lived anywhere 20 years, he’s had no interest in checking into it but for some reason, lately, he’s shown an interest. I believe he’s determined that the payback time is now about 10 years.

When we came here in 2011, we rented a house north of town. In most of Texas, the customers choose their electric provider. Vince did the research and the company we chose had a fixed rate for one year of about 7¢ per kilowatt hour. When we moved here later in 2011, we were not able to choose our provider but beginning next month, we can. Vince has again done his research and it looks like we’re going to be paying about 13¢ per kilowatt hour . . not even three years later. Vince is definitely making some calls about getting solar panels installed, at least for part of our energy requirements.

Until we are able to be somewhat off grid, I kept wanting some way to charge electronic devices in the event we lose power for an extended period. Vince said he would look into it and that was a while back but with his new found interest in solar energy, we have a new solar charging gizmo.  It’s inexpensive and it works like a charm! Anything with a USB charger will work with it. 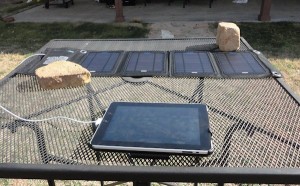 Here it is stretched out on a table in the yard. We first tried it with an old iPad, which had 49% charge remaining. 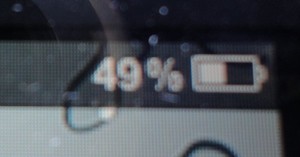 It was fairly late in the afternoon and it took about an hour to bring it up to 56%. At that point, it was getting cloudy and I brought everything in the house. 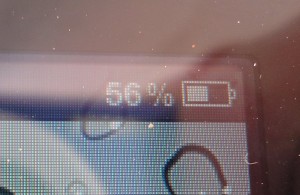 I don’t worry so much about charging the cell phones because if the power is out and cell phones can’t be charged, then our microcell isn’t going to work so our cell phones are pretty worthless while at home.  I always think that if there was a long term power outage, I would like to be able to write so if I could keep the iPad charged, I could continue to write. Most important, I keep my Kindles full of books and as long as I can keep those things charged, I can read for years!  And music . . if I can keep my ipods charged, I’ll have music.

I wasn’t losing sleep worrying about being able to charge electronic devices but I surely do feel better knowing we can keep them charged, even without electricity.  I figure if we have to live with the heat and the sun, we might as well put it to good use!

Something to think about for those who are interested in this small setup – you need a very sunny location that is safe and secure. If your backyard is shady and you’re going to have to put this all out in your front yard, chances are you iPad or iPhone, charged or not, may go missing! If you have a sunny second floor deck that cannot be accessed from the ground, or . . if you live out in the middle of nowhere without neighbors, this is an ideal setup.