There are two ways to look at this weather situation!

In the end, it doesn’t really matter what I think, does it?

Sunday, it was 75º.  It didn’t take long before I traded the sweat pants for shorts while out working in the garden.

Last night it dropped to the low 20’s. 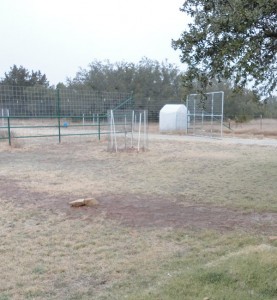 It’s hazy, halfway foggy, kinda gray, no sunshine and cold! There’s a thin layer of ice on everything. Schools here are all closed today due to icy roads.

I looked at the temps this morning, took Speck outside and almost fell (he did take a tumble), emailed Vince to see if it was ok to leave the chickens in the coops because the heaters are on in there. He said “Yes, don’t try to walk out there in this weather.”

Then I looked out and the red chickens were out!  Hmm . . I wasn’t quite sure what was going on with that so I ventured out there and . . either the chickens are crazy or Vince is crazy. The red chickens stay out later and later. I guess it was dark enough that Vince thought they were in and didn’t even notice they were still out so he locked up the coop, with the heater on, and the chickens were still outside!  They spent the night in the freezing rain outside . . while the empty coop stayed toasty warm. Maybe they’ll go in earlier from now on or .. maybe I’ll make sure I put them up every night. I always open the big door, count heads and tell them all goodnight.  I guess that’s the difference in a mom and a dad.  Dad says “It’s bedtime . . if you’re not in, that’s your problem!”  Seriously, I know when he went out there and it was way past dark so I’m shocked the chickens weren’t in already but they weren’t.

The good news is . . Saturday it will be 80º and Sunday it will be 86º.  The better news is  . . tomorrow the baby chicks get moved from the bathroom to the shop!