My few chickens that are still alive have not been reliable layers. The Dominique chickens don’t lay much during the shorter daylight periods of winter. We could put a light on them but there are just two of them and during the summer, each chicken lays maybe 3 eggs per week so it isn’t worth the cost of electricity and I’ve always figured that chickens who stop laying during winter need a little break and that’s Mother Nature’s way of giving it to them.

Of the three red hens that were left, one was injured pretty badly and has just now started sleeping on the roost. I’m not sure if she wasn’t able to get on it because of an injury or if for some reason, she felt safer in the nesting boxes but just last night, I noticed she was back up on the roost. The red chickens typically lay an egg just about every day, even during the winter. But, since the dog incident, I’ve been lucky to get 1 egg per day out of that coop.

Yesterday when I looked in the egg boxes, I was so excited to see two eggs . . til I noticed one was really weird. 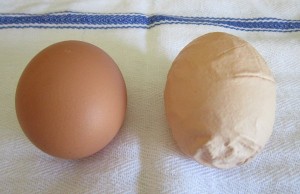 It is a hard shell but just strange!  Every now and then, maybe 3 times in about 4 years of having chickens, we’ve gotten what we call a “rubber” egg. The shell is soft and it’s gross . . especially when it looks normal and you grab it and it’s soft and squishy. Yuck!  But, this egg is hard but has all kinds of markings and dimples on it.  I wonder if it came from the hen that was injured.