Does it seem I spend more time organizing yarn than I do knitting?  My stash was pretty organized until the last few months of 2013, when the yarn sales were happening and I was ordering yarn like there was no tomorrow. It was bothering me that a lot of the new yarn was still sitting in boxes in one of the spare bedrooms. Everything is plugged in on my Ravelry queue so I knew I wasn’t going to get confused about what yarn went with which project but I wanted to get it all together so most of yesterday was spent organizing.

The yarn for each project went into a grocery sack and the name of the project was taped on the outside of the bag. The bag went into a Rubbermaid tub. 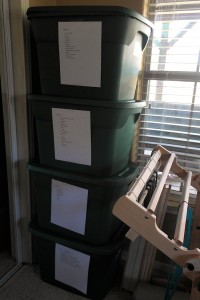 On the outside of each tub is a list of projects in that tub. 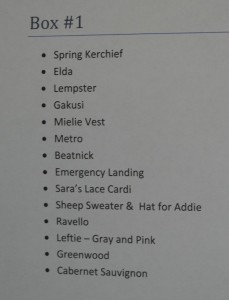 There are a total of about 45 projects and except for six of them, they’re all sweaters!  Six projects that I’m either currently working on or will be working on soon, were not placed in the tubs. Those are:

Another tub was filled with mostly sweater quantities of yarn that I have no idea what pattern I had in mind when it was purchased.  Some of it was purchased when we were still in MO and a shop there was going out of business.  Here’s what I have that I need to match up with a pattern:

There may or may not have been a project in mind when I bought all these skeins but I need to match them up with a pattern.

I think . . if I don’t stop ordering yarn and start knitting . . Nicole is going to inherit a whole lot of yarn! At least I feel more organized . . somewhat!