Friday evening Vince asked me what plans I had for him over the weekend. That was the question I had been waiting to hear!

Saturday morning after breakfast, Vince screwed in ONE of the plugs, put the switch plate on and said “How does that look?” Great!  Only 7 more to go and then you can put in the lights!  His response: Let’s go to Brady for lunch. I heard the words “OK” coming from my mouth but my head was saying “Really? That’s not what I wanted to do today! And we’re on diets!”

Off we went to Brady, which is about an hour from here. First stop was Gypsy Market which is kind of a hodgepodge type place. At one time Brady had a nice little knitting/fabric shop on the square but it had moved and apparently has a new owner. There were several shops, more look large booths in an older building. I headed straight to the yarn area . . where I was promptly met by three cats. Don’t get me wrong, I like my cat but I’m not real fond of them in a shop.  There was lots of Red Heart yarn – a whole different type yarn from what places like The Loopy Ewe and Eat, Sleep, Knit carries. I bought a couple of skeins to make a sweater for Addie and they had some furry yarn that I think will work well for the sheep on the sweater I want to make for her. I doubt I go back to that shop.

From there we headed to Boondocks . . our newest favorite place to eat. 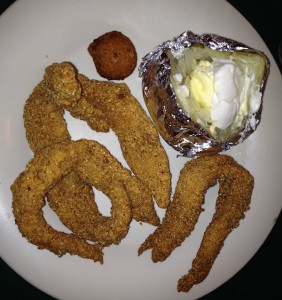 There’s a Tractor Supply in Brady so you know we had to stop there.  Mr. Boots Wearer (aka Vince) found some boots he likes but he didn’t get any. 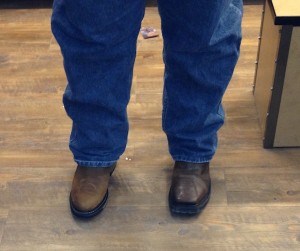 Vince and His Boots 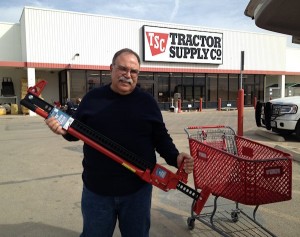 Then on the way home from Brady, Vince said “Want to go to San Saba?” Oh, yes . . I really like San Saba. They have Harry’s. They have San Saba Olive Oil Company. Vince likes to go by Duke’s Ammo and then on the way out of town, we stopped by The Great San Saba River Pecan Co.

I won’t show you all our purchases but we got balsamic vinegar at San Saba Olive Oil Company. We’re using lots of balsamic and they have some great vinegars. 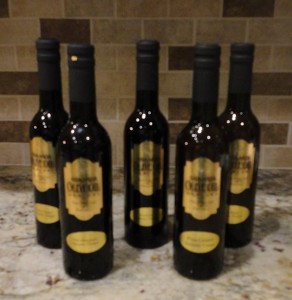 I don’t know if you can read the labels but we got blueberry, pear champagne, pina colada, peach something and one more. Can’t remember and I can’t read the labels in the photo and I’m too lazy to get up!

At the pecan place, we bought pecans and we got a couple of their yummy jellies . . like we can eat jelly on our diets! 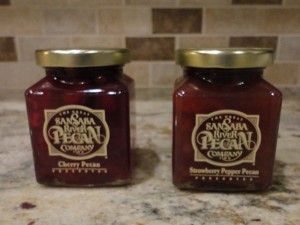 The Cherry Pecan has been a favorite ever since we’ve been going there but the Strawberry Pepper Pecan . . I just hope I don’t eat it all during the night tonight or, maybe I should and get it out of the house! 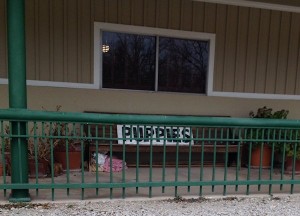 We came so close to coming home with a puppy. They had one left . . I forgot what kind they were . . whatever Hank, the cow dog is. We played with the one remaining puppy, rubbed his fat little belly and just about fell in love with him. Then I remembered . . Speck is in the house, Boots is in the sewing room and there are baby chickens arriving soon. After the incident with my chickens, I don’t think I’ll ever have an outside dog when we have chickens so . . we came to our senses and left the puppy in San Saba.